COMMENT “Only one percent of Malaysians considered poor, minister insists”, screamed a newspaper headline in 2015. The minister in question was Idris Jala, the CEO of Pemandu.

The official poverty rate of Sarawak stood at 0.9 percent, 0.5 percent in the urban areas compared with 1.6 percent in the rural areas. While poverty may have been almost eliminated, technically speaking, the challenge of low incomes has not.

A closer examination of the household income statistics in Sarawak reveals the extent of the urban-rural divide.

According to the 2014 Household Income Survey (HIS), 9.1 percent of households in urban Sarawak earn RM1,999 or less. By this measure, Sarawak ranks eighth from the bottom, better than states such as Perak (17.7 percent), Terengganu (12.2 percent) and Kedah (13.6 percent) and not far behind Penang (8.5 percent).

But in rural Sarawak, 33.1 percent of households earn RM1,999 or less, putting Sarawak in second last place behind Kelantan (39 percent).

In other words, low incomes in rural Sarawak are still a massive challenge, especially since transportation and other related costs to the rural areas in Sarawak reduce the disposable income for many households. 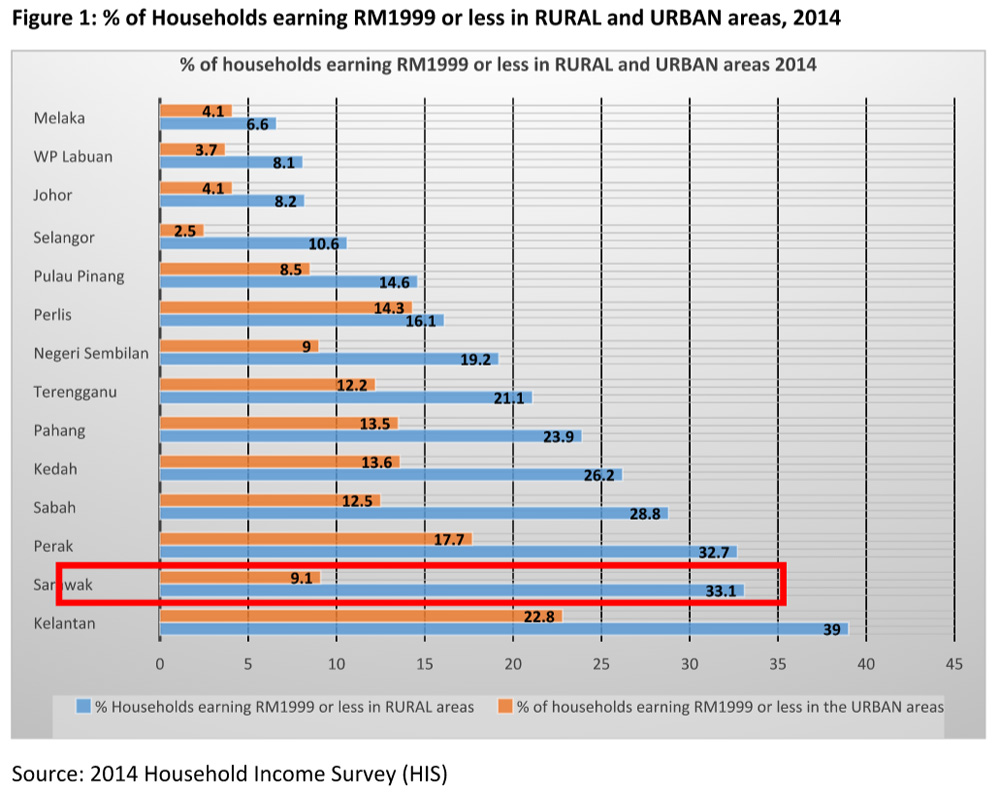 Other indicators also show a stark contrast between access to infrastructure between the urban and rural areas. Access to a clean and regular supply of water in the rural areas has been a long-term problem in Sarawak.

The HIS 2014 figures show the extent of the rural-urban divide. A total of 98.4 percent of households in urban Sarawak have access to piped water in the house, which is comparable with Peninsular Malaysia.

However, only 61.6 percent of households in rural Sarawak have access to piped water in the house, putting Sarawak third from the bottom (above Kelantan and Sabah).

During elections, new water tanks will be rolled out and distributed to the longhouses in the rural areas. But instead of distributing water tanks, wouldn’t it be better to allocate funding to provide regular water supply into the houses in these areas? 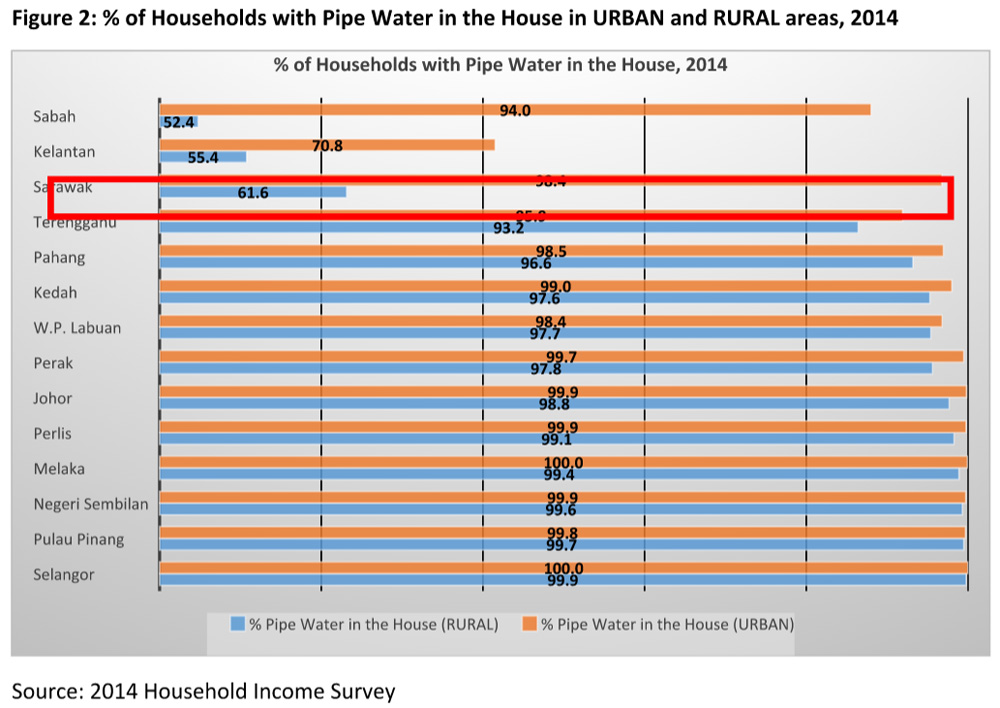 Another indicator of the urban-rural divide in Sarawak is the rate of car ownership. In urban Sarawak, 84.9 percent of households have at least one car, which is comparable to Penang (85.8 percent).

However, in rural Sarawak, the percentage of car ownership falls to 47.4 percent (compared with 69.3 percent in rural Kelantan and 56.6 percent in rural Sabah). It is not that Sarawakians in the rural areas do not want to own a car, especially given the long distances families have to travel and the poor state of public transportation in Sarawak.

I believe the reason is that the low household incomes, which often can be irregular, given rural Sarawak’s dependence on agriculture, is why many households cannot obtain loans in order to purchase a car. 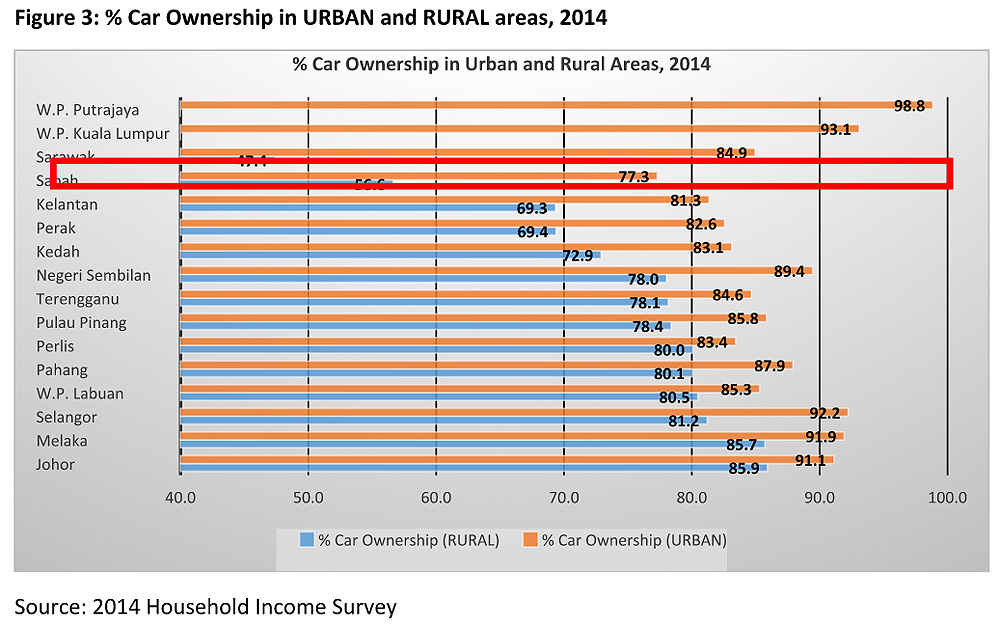 The importance of having access to transportation is highlighted by the long distances children have to travel to get to their schools in rural Sarawak. For example, 1.8 percent of households in urban Sarawak are located more than 9km from the nearest secondary school. But in rural Sarawak, this figure jumps to a whopping 51.2 percent of the households! 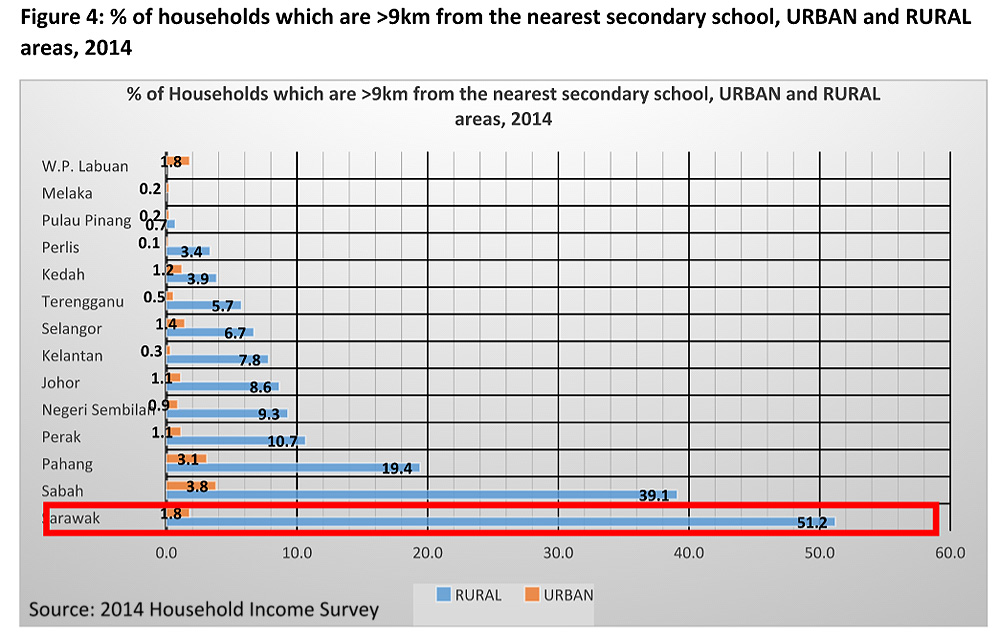 Many parents in rural Sarawak have to travel long distances to get their children to school, especially at the secondary level. Some of the travelling is mitigated by having the children to stay in hostels in these secondary schools, which are mostly located in and around the respective towns in these rural districts.

But still, the fact that almost half of households in rural Sarawak do not own at least one car shows the underlying deprivations that exist in this state.

So, if a minister proudly boasts that the poverty rate in Sarawak has been reduced to less than one percent, please ask him or her to take a look at the statistics for rural Sarawak in terms of household incomes and access to basic amenities and infrastructure and patiently wait for the reply.

On Monday: Sarawak, a tale of two nations

DR ONG KIAN MING is the DAP Member of Parliament for Serdang. He can be reached at [email protected]