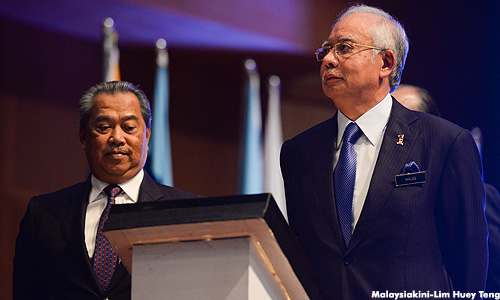 Muhyiddin Yassin has asked Prime Minister Najib Abdul Razak whether he has forgotten the pledge he made a year ago, when urging the people to be patient while waiting for the auditor-general's report on 1MDB.

Instead, portions of the official report had been classified under the Official Secrets Act 1972 (OSA), said the former Umno deputy president.

Muhyiddin said he, like other citizens, is seeking the truth on 1MDB and wants the government to declassify the report immediately.

“This is for the people to know the actual situation on the allegation of billions of ringgit in trade deals by the company.

“Several portions of the final auditor-general's report on 1MDB had been revealed by portal Sarawak Report the past couple of days, and among them allegedly important information by the company.

"It includes the alleged loss of US$7 billion (RM28 billion) paid to several fake companies which do not have any business relations with 1MDB,” he said in a statement today.

Muhyiddin noted that people have questioned the 1MDB issue since early last year, and he had voiced his concerns to the cabinet by suggesting that the auditor-general investigate and conduct a forensic audit.

The Pagoh MP added that the investigation was vital to determine the actual standing of the 1MDB account and would answer all the allegations against the company and the sitting prime minister.

The Pagoh MP said Najib had promised that the auditor-general's report on 1MDB would be announced and assured that individuals who committed any wrongdoing would be brought to justice.

“It is not fair for certain politicians to put the government culpable in the court of public opinion before the actual facts are being tabled to the rightful authorities from the auditor-general and the Public Accounts Committee (PAC) which are deemed non-partisan... hence while waiting for it, please stop speculations and make conclusion without the information tabled by the auditor-general in its detailed study on the financial affairs of 1MDB.

“If we are sincere in finding the truth to the allegation, we need to get information from a rightful source (like the auditor-general) and not from a news portal or third party or a blog which may have a hidden agenda.”

He reminded that the auditor-general began its probe in March 2015 and the interim report was completed in June 2015, adding that the final report was tabled to the PAC on March 2016.

Not only was the auditor-general's report not revealed to the public, it was classified, Muhyiddin added.

“It was also classified under OSA 1972. The action to classify the auditor-general's report as a confidential document seems strange as the auditor-general is responsible under Article 107 of the Federal Constitution to give the report to the Yang di-Pertuan Agong.

“The report is then tabled in the Dewan Rakyat. Has the government been given more power under the Federal Constitution to hide the report from public knowledge?” he asked.

Najib's former number two in the cabinet also questioned whether the PM is truly sincere.

“If he is sincere and a gentleman and willing to find the truth, he should declassify the status of the auditor-general's report on 1MDB and table the result of the investigation for the public to see. Do not delay or give reasons,” said Muhyiddin.