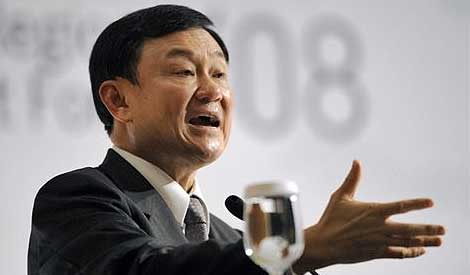 Ex-Thai PM Thaksin to be charged with royal insult

Thailand’s ousted former Prime Minister Thaksin Shinawatra will be charged with royal insult and computer crimes, the junta’s attorney general said on Friday, a day after a court issued a second arrest warrant for his sister.

Thaksin, whose populist movement’s struggle with the Thai establishment has dominated politics for over a decade, lives in exile after fleeing Thailand to escape a jail sentence for corruption after he was overthrown in a 2006 coup.

His sister, Yingluck Shinawatra, overthrown as prime minister in 2014, fled Thailand in August to avoid conviction in a criminal negligence case she said was politically motivated. She was jailed for five years in absentia.

Attorney general Khemchai Chutiwong did not give details as to exactly how Thaksin had insulted the monarchy, which is protected by a stringent lese-majeste law.

"This is a criminal case," he told a news conference. "Right now it remains to find the individual."

Supporters of the Shinawatras, who had the backing of poor, rural voters, have won every election since 2001. They remain a significant force ahead of a ballot the military has said could happen as early as next year.

It was not clear whether the attorney general’s office was referring to accusations of royal defamation against Thaksin that Thai police said they were investigating after he gave an interview to South Korean media in 2015.

Republishing details of an alleged offence to the monarchy could also be a crime under a law that sets a sentence of up to 15 years for each offence of royal insult.

Since taking power in a 2014 coup, the military government has pursued supporters of the Shinawatras and has jailed several leaders of the red-shirted political movement that backed them. A criminal court issued a second arrest warrant for Yingluck on Thursday for violating immigration law during her escape.

Thaksin’s son, Panthongtae Shinawatra, has also complained of victimisation and this week called for the dropping of a money-laundering investigation against him.

Thaksin has a home in Dubai but travels frequently. His Thai passports were revoked after the interview he gave in 2015 but he holds the passport of at least one other country.