MALAYSIANSKINI | Rajini Saudranrajan, 39, spoke in a sombre tone as she recalled the things she heard as a child, having lived in a "rough neighbourhood" in Puchong, Selangor.

Among the conversations between the adults had been about her neighbours, some of them only teenagers, becoming drug addicts and alcoholics. Many of those involved, she noted, were Indian Malaysians.

Some were also involved in crime and it was not uncommon when some boys and girls would suddenly disappear, she said.

Fortunately for Rajini, she did not go the way of those teenagers, having gone on to become a law graduate from the University of London.

Rajini moved out from that neighbourhood at the age of 10. Despite growing up away from her old neighbourhood, Rajini couldn't help remembering the things she had heard there as a child.

As she grew into adulthood, Rajini realised all those talks were not just rumours but were real problems plaguing teenagers, like those in her old neighbourhood.

“I’ve always wanted to change this, recognising that this trend was a problem... I just didn’t know what to do,” she said in an interview with Malaysiakini.

The opportunity came when Rajini heard about the MySkills Foundation, an organisation set up in 2011 under the Ministry of Domestic Trade, Cooperatives and Consumerism.

The organisation focuses on developing underprivileged Indian youths in the country.

Rajini reached out to MySkills over a year ago and was told she could help out with the girls they mentor and house. She decided to take on the challenge, starting with weekly classes on the Bhagavad Gita. The Bhagavad Gita is a Hindu scripture that has inspired the likes of Mahatma Gandhi and other notable figures. Rajini is a practitioner of its teachings, having studied it from a young age, and she frequently quoted verses from the book during the interview.

While Rajini went in with an enthusiastic frame of mind about helping underprivileged girls, not all of them who first came into the programme were happy about the idea that they needed help.

She related her experience with 15-year-old Maya (not her real name), who didn't want to be in the programme.

The teenager was sent away by her family after repeatedly coming home drunk in the wee hours after a bout of drinking with her friends, having fallen in with the wrong crowd.

“Maya was very quiet and she would often sleep away in my classes. I let her be…" said Rajini.

However, during a quiz, Rajini was surprised at Maya's knowledge about the Bhagavad Gita. Maya scored well in the test, beating the rest of the girls.

It was from this point on that Rajini managed to get Maya to open up.

"Today, she (Maya) is a confident and very responsible girl.

“She’s now one of the best students here, and I know many others who are progressing like her,” said a beaming Rajini before a class at the MySkills office along Jalan Yap Ah Shak in Kuala Lumpur.

Maya, when met by Malaysiakini, said she had completed a secretarial course and was helping out as a receptionist at a law firm. She constantly receives counsel from Rajini.

"I would never have made it this far if it wasn’t for Miss Rajini,” she said.

Many of the girls there Malaysiakini spoke to came from similar backgrounds. And like Maya, all of them seemed to have found new meaning in their lives. 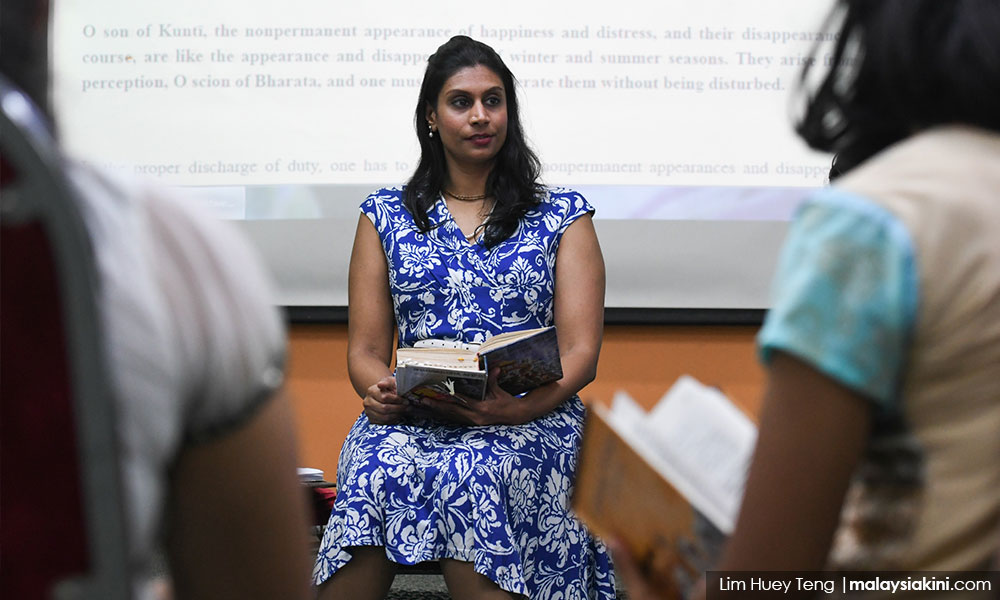 Rajini is also a strict vegetarian and teaches the youths how to cook vegetarian dishes like tauhu sambal and samosa.

She has also roped in her husband, who is also vegetarian. He runs a similar programme, but for boys under MySkills, at a centre in Port Klang, Selangor.

“I have never looked back, and hope I can continue to help more girls", Rajini said.

In her own words, Rajini shares her story of finding meaning in a life of suffering.

I SAW A LOT OF SUFFERING AND I WANTED ANSWERS. People were drifting away from the mainstream and plunging themselves headfirst into vices, and I had to find out why. I truly felt sorry for their conditions and wanted to relieve them of their sufferings, but I just did not know how to.

NOTHING IN MY LIFE COMPARES TO WHAT THESE GIRLS WENT THROUGH. I've been through low moments in my life, but what I experienced is not even half as bad as what any of these girls have been through. Some of us may have had parents who put food on the table three times a day but sometimes we would experience minor hiccups in our relationship with them, but nothing to the extent of throwing us off the track like with these girls.

IMAGINE HAVING PARENTS WHO NEGLECT YOU or who do not respect you as a person. Or not having enough funds to pay for your education, having to drop out (from school) at 13 or 14. How can we expect someone to progress in this sort of environment?

THE CRIME RATES FOR THE HARDCORE POOR IS HIGH, especially for Indian Malaysians. This, I feel, is because some of them have no self-esteem, are insecure and continue to take to crimes.

I FOUND MY ANSWERS IN A “MIRACLE BOOK” called the Bhagavad Gita. I discovered this scripture when I was growing up, but it was only when I was 21 years old that I decided to study the book carefully. 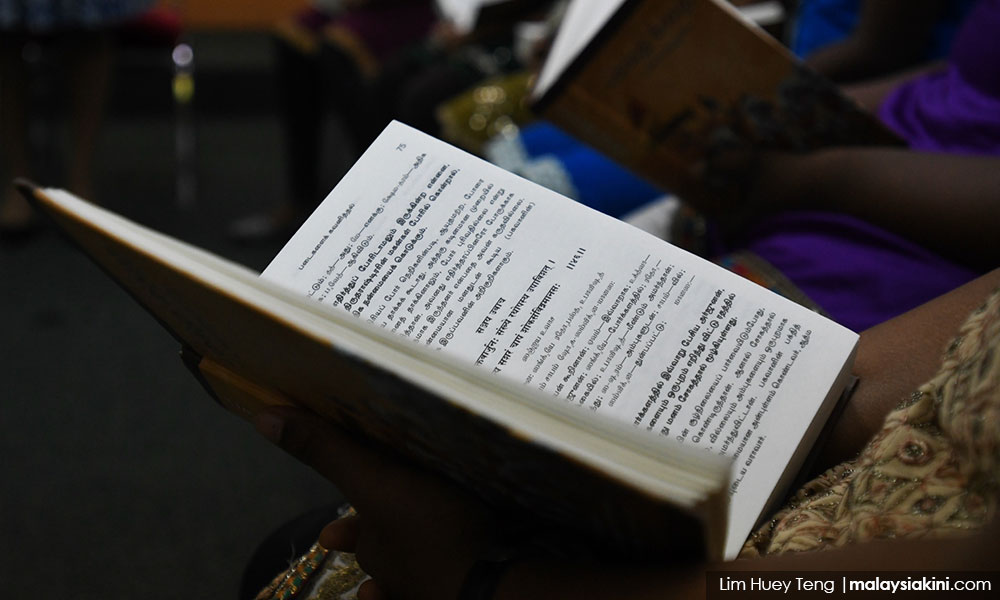 MY FIRST DAY WITH THE GIRLS AT MYSKILLS WAS DIFFICULT because the girls had no idea about the Bhagavad Gita. I assumed everyone would have at least heard of the book, if not read it. But, boy was I wrong. They thought it was a mere religious scripture. I related to them how the protagonist, Arjuna, was confused and was also struggling to understand why he was suffering. Initially, the girls were not too attentive, though they were very courteous with me.

I LISTENED TO THEM carefully and indicated that I could understand the different challenges they faced in their lives. I also taught them in a way they could understand and relate to. My classes give the girls hope and instilled self-esteem and confidence in them.

I WISH I COULD HELP MORE COMMUNITIES but my focus right now is to work together with MySkills in elevating the lives of these neglected girls.

‘Tunku gave us strength to fight for women’s rights’