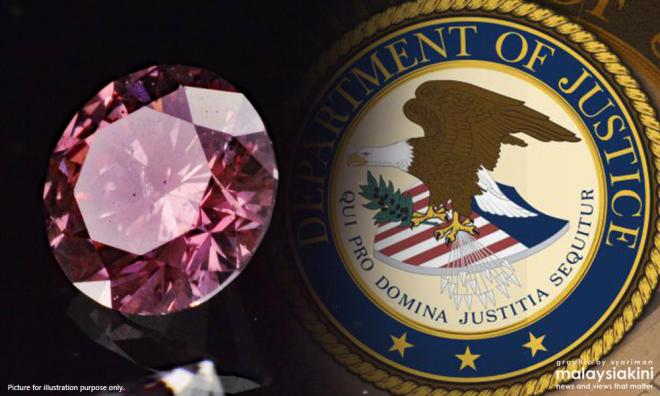 Federal agents were worried that they would be put in an awkward position if the wife of Malaysian Official 1 (MO1) had worn jewellery listed by the US Department of Justice (DOJ) as having been acquired using misappropriated 1MDB funds, according to a news show by MSNBC.

American television host Rachel Maddow, speaking on her programme "The Rachel Maddow Show" on Friday night, said it was "strange" when US president Donald Trump decided to host Malaysia's leader at the White House in the middle of a major investigation.

"There was actually worry in advance of the (visit)... that if on this trip to the White House, the PM’s wife wore some specific jewellery she is known to possess, federal agents might be put in the awkward position of having to take that jewellery off her, like maybe when she was leaving the White House grounds, or maybe at their hotel?" she said.

According to the DOJ, 251-page filing with the US District Court for the Central District of California in June last year, a US$27.3 million 22-carat pink diamond pendant and necklace was purchased for "MO1's wife" using misappropriated 1MDB funds.

It also claimed a further 16 separate pieces of gold jewellery worth US$1.3 million was also purchased for MO1's wife.

During the show, Maddow also touched on claims that US Republican donor Elliot Broidy solicited US$75 million from businessperson Low Taek Jho for the DOJ to drop its 1MDB investigations.

The claim was based on Broidy's email, who claimed he was "hacked" by a foreign government.

Malaysiakini is unable to independently verify the MSNBC report.

According to the DOJ civil forfeiture suit, at least US$4.5 billion was allegedly misappropriated from 1MDB and laundered through the US financial system to acquire various assets in the country.

It is seeking to seize US$1.7 billion in assets allegedly acquired using the stolen funds. However, the pink diamond and gold jewellery purchased for MO1's wife was not on the DOJ's seizure list as of June last year.

One of the major transaction in the 1MDB saga, according to the DOJ, was a deposit of US$681 million into the bank account of MO1 in 2013.

The US$681 million is colloquially referred to as "RM2.6 million," based on the change rate when the transaction was first publicised by the Wall Street Journal.

Najib claimed that the US$681 million was a donation from a member of the Saudi royal family and that he had returned the remaining US$620 million.

However, the DOJ claimed the money originated from 1MDB and the "returned" sum was used, among others, to purchase the pink diamond jewellery for MO1's wife.