The United States Department of Justice (DOJ) may have finally shed light on what happened to the US$620 million that “Malaysian Official 1” (MO1) had returned to his "donor".

In a latest civil forfeiture suit filing, the DOJ alleged that at least US$27.3 million was used to buy a 22-carat pink diamond pendant and necklace for “MO1's wife.”

It also indicated that the returned "donation" money was used by Penang born-tycoon Jho Low to purchase a US$750,000 photograph as a gift for actor Leonardo DiCaprio.

MO1 is described by the DOJ as a high-ranking government official. 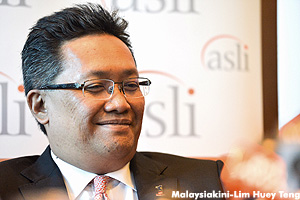 Najib has denied allegations of misappropriating public funds for personal gain while Abdul Rahman (photo) said the fact Najib was not named in the DOJ filing showed that the prime minister was not a subject of investigation.

In last year's suits, the DOJ claimed that a total of US$731 million of allegedly misappropriated 1MDB funds had entered the personal accounts of MO1.

This included US$681 million transferred in March 2013, which the DOJ documents quoted the Malaysian attorney-general Mohammed Apandi Ali as saying that it was a personal donation from a member of the Saudi royal family.

The DOJ and Apandi both noted that in August 2013, US$620 million of the funds was returned.

However, the DOJ claimed the money had originated from 1MDB, and was transferred to MO1 from, and later returned to, the Singapore bank account of Tanore Corporation.

Singapore court cases on 1MDB established that the account was controlled by Low.

However, what happened to the returned US$620 million had remained a mystery until the allegations were listed in the DOJ's 251-page lawsuit yesterday.

On June 2013, two months before the sum was returned, the DOJ said Low had contacted jeweller Lorraine Schwartz, asking urgently for a diamond necklace with a "18 carrot (sic) pink heart diamond".

The next month, Schwartz travelled to Monaco with a 22-carat pink diamond, to meet Low, as well as then Aabar chief executive officer Mohamed Ahmed Badawy Al-Husseiny, aboard a yacht.

Also on board the yacht was the wife of MO1, and her friend - dubbed by the DOJ as "Malaysian Friend".

On the yacht, the group purportedly discussed the design of the necklace that would hold the pink diamond.

According to the DOJ, Schwartz's next encounter with MO1's wife was in New York on Sept 28, to show a layout of the necklace's design.

Najib and his wife Rosmah Mansor were in New York at the time for the UN general assembly. Najib addressed the assembly on Sept 28.

The DOJ claimed that the finished necklace was later delivered to "Malaysian Friend" in Hong Kong on March 7, 2014, so that it could be delivered to MO1's wife.

It is not clear if or when MO1's wife personally received the necklace.

The DOJ alleged that payment for the US$27.3 million piece of jewellery had originated from the US$620 million MO1 returned to Tanore in August 2013.

On Sept 9, 2013, US$58.85 million from the Tanore account was channelled to another account - Midhurst Trading Limited - which Singapore courts established was opened by Low under the alias of Eric Tan.

The next day, US$32.76 million was transferred from Midhurst to a DBS Singapore bank account for Blackrock, another account held nominally by Tan.

From there, two wire transfers were made to Schwartz's Bank of America accounts totalling US$27.3 million.

The DOJ noted that Low might have used Tan's email to ensure his name was not associated with the diamond's purchase records.

An email, from Tan to Schwartz's assistant, had asked for Low's name not to be stated in further emails "as he is just an introducer and not the buyer".

Besides the US$27.3 million pink diamond necklace, the DOJ also accused Low of purchasing 27 different 18-carat gold necklaces and bracelets for MO1's wife, worth a total of US$1.3 million.

The gold necklaces and bracelets were bought using funds allegedly misappropriated from a Deutsche Bank loan meant for a legitimate subsidiary of Abu Dhabi's International Petroleum Investment Co (IPIC) - but was diverted to a dubious company mimicking IPIC subsidiaries.

Meanwhile, another purchase allegedly made using the US$620 million MO1 had returned, was a photograph by Diane Arbus titled “Boy with the Toy Hand Grenade".

The U$750,000 photograph was purchased with funds allegedly channelled from the Tanore account to former 1MDB subsidiary SRC International.

The DOJ claimed that on Aug 30, 2013, three days after the US$620 million was returned, a total of US$334 million was sent from Tanore to two overseas investment firms Enterprise Emerging Market Funds (Enterprise) and Cistenique Investment Fund (Cistenique).

Then, between Sept 4 and Sept 6, 2013, a total of US$232.9 million was allegedly wired from Enterprise and Cistenique to SRC International.

The DOJ claimed that US$233.4 million was then wired from SRC International to another investment firm - Pacific Harbor Global Growth Fund.

On Sept 10, the DOJ said, US$228.7 million was transferred from Pacific Harbor to a shell company nominally controlled by Tan, dubbed Affinity Equity.

Then between Oct 28 and Oct 30, 2013, Affinity Equity transferred US$1 million to another account nominally controlled by Tan dubbed the Platinum Global account.

The DOJ stated that in March 2014, Low gave the photograph to DiCaprio as a gift.

However, what happened to the rest of the US$620 million that MO1 returned is unclear.

The US$681 milllion MO1 had received has become popularly known in Malaysia as the RM2.6 billion donation.

Najib and his supporters have insisted that it was a donation from a Saudi royalty.