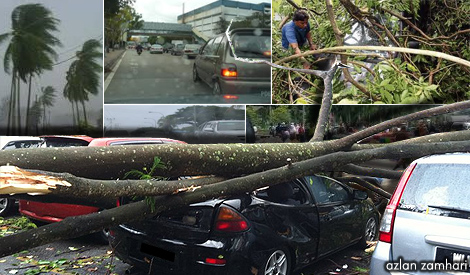 89 families in Kedah affected by storm

A total of 89 families were affected when storm lashed through seven districts in Kedah late yesterday and early today, causing destruction to their homes.

“Immediate aid of between RM100 and RM300 has been disbursed to some of the victims, including in Langkawi and Padang Terap, to help ease their burden,” he said in a statement today.

He said the victims were also given mats, blankets and sarong.

Meanwhile, a survey by Bernama in Kampung Lemping and Kampung Kubang Siam, among the villages affected in Kota Setar, found most of the houses had their roofs ripped off by the storm.

Siti Nur Zulaika Salleh, 22, of Kampung Kubang Siam, said the roof of her house was blown away by the storm at about 2.30am when she and other family members were sleeping.

She estimated her loss at RM10,000 which included furniture.

Another victim, Md Zohair Salleh, 50, said the storm struck at about 6.30pm and ripped apart the zinc roof of his house.

“The roof landed about 100 metres away in a paddy field. I was home alone then as my wife and three children were attending a kenduri at a nearby village,” he said and estimated his loss at RM20,000.

Meanwhile, Kubang Rotan assemblyperson Mohd Asmirul Anuar Aris, who visited the victims, advised them to lodge a police report to facilitate disbursement of aid by the relevant departments and agencies.

He said five houses in the Kubang Rotan constituency were destroyed in the storm.