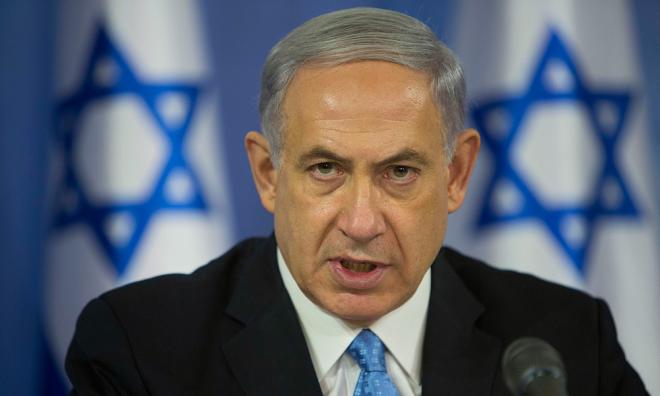 Prime Minister Benjamin Netanyahu used a visit to a secretive Israeli atomic reactor on Wednesday to warn the country’s enemies that it has the means to destroy them, in what appeared to be a veiled reference to its assumed nuclear arsenal.

“Those who threaten to wipe us out put themselves in a similar danger, and in any event will not achieve their goal,” he said during a ceremony to rename the complex, near the desert town of Dimona, after the late Israeli statesman Shimon Peres.

Netanyahu’s remarks, issued by his office in a transcript, came as Israel lobbies world powers to follow the United States in exiting their 2015 deal with Iran that capped the Islamic Republic’s nuclear capabilities.

The Israelis deem the agreement insufficient for denying their arch-foe the means to eventually get the bomb - something that Tehran, which is a signatory to the 1970 nuclear Non-Proliferation Treatry (NPT), denies wanting.

The reimposition of US sanctions has put pressure on the Iranian economy, scaring off some foreign investors even as European powers try to salvage the 2015 pact. On Wednesday, Iran said it could abandon the accord.

Since its 1979 Islamic Revolution, Iran has preached Israel’s destruction. It backs the Lebanese militia Hezbollah and the Palestinian Islamist movement Hamas. Its reinforcement of Damascus during Syria’s civil war is seen by the Netanyahu government as a further Iranian deployment on Israel’s borders.

Israel, which is outside the NPT, neither confirms nor denies having the bomb, a decades-old “ambiguity” policy that it says keeps hostile neighbours in check while avoiding the kind of public provocations that can spark regional arms races.

The Israeli reticence has long been tolerated by Washington.

During a visit to Israel last week, US National Security Adviser John Bolton told Reuters that he met officials from the country’s Atomic Energy Commission but that this should not be seen to signal any policy review by the Trump administration.

“I don’t think there is anything out of the ordinary or unexpected,” Bolton said of the meeting. Asked to elaborate, he added only: “No change in policy.”

Israel has carried out scores of attacks against suspected Iranian and Hezbollah emplacements or arms transfers in Syria, with Russia, Damascus’s big-power backer, turning a blind eye.

“The IDF (Israel Defence Forces) will continue acting with full determination and with full might against Iran’s attempts to station forces and advanced weapons systems in Syria,” Netanyahu said in his Dimona remarks.

The premier credited Peres, his predecessor and a Nobel Peace laureate who died in 2016, with setting up the reactor in the 1950s as part of a vision of “normalisation between core countries in the Arab world and a strong State of Israel”.

“This process ... is happening before our very eyes, on a scale that would have been impossible to imagine just a few years ago,” Netanyahu said, alluding to Israel’s discreet relations with Gulf Arab powers that see Iran as a common foe.