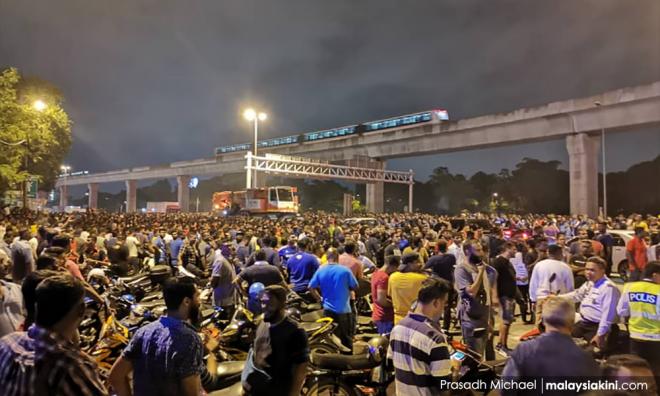 Commotion at Seafield temple has eased

The commotion which occurred at the Sri Maha Mariamman Temple in USJ 25, Subang Jaya yesterday seems to have eased.

Observation by Bernama at 9am today found the large crowd that gathered there since last night getting smaller, and no provocations made.

Heavy rains after 3am are believed to have caused people to leave the area.

However, the remnants of two vehicles that were torched early today remained in the middle of the Damansara-Puchong Expressway, blocking motorists from both directions, and resulting in a traffic congestion that stretched for more than 2km.

The incident broke out about 2am yesterday following a scuffle between two rival groups at the temple site, resulting in 18 vehicles and two motorcycles being torched.

Following the incident, the police arrested 17 people for investigation.

The incident, stemming from the relocation of the 127-year-old temple, continued until early this morning when some members of the public who had gathered there, torched the wreck of three burnt cars.

At about 2am, part of the crowd began marching to Menara MCT which houses the office of developer One City Development Sdn Bhd, about 2km from the temple, before shattering the glass panels of the building and damaging nearby vehicles.