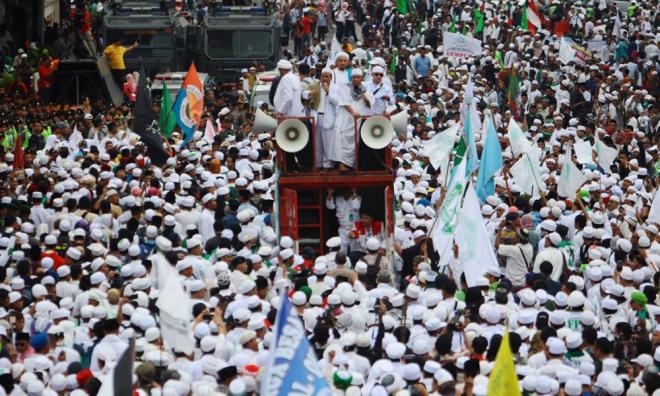 Tens of thousands of Indonesian Muslims held a rally in Jakarta today led by hardline groups who had agitated to remove the city's Christian governor, underscoring the growing influence of Islamist groups ahead of elections in 2019.

The rally was attended by former general, Prabowo Subianto, a nationalist with strong links to Islamists who is seeking to topple President Joko Widodo in next year's polls after being narrowly defeated in 2014 during a bitterly fought campaign.

The crowd, many of whom were dressed in white and carrying Islamic flags, started gathering at Jakarta's National Monument from around 3am to hold prayers.

"We are proud because the Islam in Indonesia is Islam that unifies and is united and will maintain peace for everyone," Subianto said in a speech.

Thousands of police had been put on standby but the rally was peaceful.

Organisers call their movement a "reunion" for a series of rallies starting in late 2016 that targeted Jakarta governor Basuki Tjahaja Purnama, the first ethnic-Chinese Christian in the job, who was charged with insulting the Quran.

Religious and political tensions spiralled during this period and then governor Purnama, an ally of President Widodo, lost his bid for re-election to a Muslim rival and was later sentenced to two years in jail for blasphemy.

Hardline Islamist groups were banned under the authoritarian regime of President Suharto, which ended in 1998, but they have gained ground in recent years, emerging from the fringes of society in the world’s biggest Muslim-majority country.

Widodo, who is a popular moderate, has chosen a 75-year-old Islamic cleric, Ma’ruf Amin, as his running mate in next year’s election, sparking concern among some that he is pandering to conservative Muslims in a pluralist country with significant minority communities.