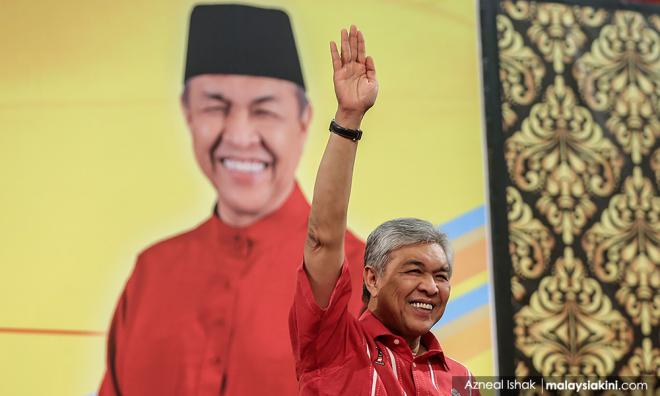 A group of NGOs have come out in support of besieged Umno president Ahmad Zahid Hamidi, urging him to crack down on those trying to oust him.

"We urge the Umno president to take disciplinary action or sack Umno members who threaten the Umno leadership which is elected by Umno members.

"We hope that the Umno president will not entertain the words of leaders who have quit Umno," said Pertubuhan Sahabat Ulul Amri Malaysia president Syed Muhammad Imran Syed Abdul Aziz, whose statement was endorsed by 29 other NGOs.

Syed Muhammad had previously called for the reinstatement of Najib Abdul Razak as Umno president. Najib stepped down after leading the party to its first defeat since independence in the 14th general election.

In his statement today, the NGO leader said the allegations that Zahid was directionless in his leadership and was unable to deal with Umno's finances were down to a matter of "perception."

He said among Zahid's "best" moves since assuming the Umno top post was engaging in cooperation with PAS, and added that claims of the president attempting to cut a deal with DAP were untrue.

"The NGOs fully support Zahid as Umno president. This is because the allegations against the current Umno leaders are mere perception and is only taken seriously by a small group in Umno who are in the opposition.

"Zahid must be courageous in making his decision and should not heed BN or Umno MPs who want to quit as they are not real Umno fighters," he said.

Another 10 MPs, including former minister Hamzah Zainuddin, had quit Umno since Thursday. Umno was the largest party with 54 MPs despite losing power in the 14th general election.

It is now left with 38 MPs and is relegated to becoming the third largest party behind PKR and DAP.

Hamzah had warned that more MPs will quit Umno if Zahid did not step down.

Following the exodus, Umno leaders still in the party have also called for Zahid's exit.