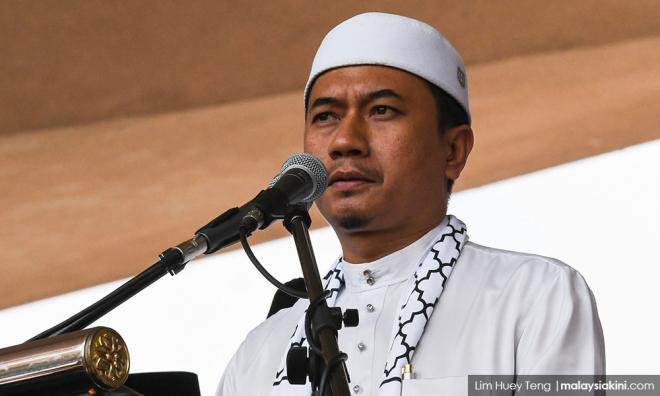 DAP supremo Lim Kit Siang gets off to an early start by giving out spring couplets to the members of the Chinese community in Kampung Raja.

On BN side, acting Umno president Mohamad Hasan will be in Jelai today, while candidate Ramli Mohd Nor will visit Pos Lemoi, Pos Betau and Sungai Koyan.

Meanwhile, the Bersih-organised live debate between candidates will be held at 9pm at Heritage Hotel in Tanah Rata.

11.59pm: This concludes our live coverage today of the Cameron Highlands by-election campaign. Follow our live blog again for the 13th day of campaigning tomorrow.

'Both BN and PAS agreed on Cameron candidate'

“BN’s candidate for Cameron Highlands is a candidate agreed upon by BN and also by PAS.

Khalil adds Muslims should vote for Ramli, a fellow Muslim and a Cameron Highlands local.

On top of that, he says, the former top cop is a candidate with integrity.

9pm: Tanah Rata - The debate between three of four candidates for the by-election records a poor attendance, unlike the Pakatan Harapan mega ceramah being held nearby.

Only about 50 people turn up for the candidates' debate on 'What Changes Does Cameron Highlands Need?'

The debate, being held at the Heritage Hotel, is televised live on TV1 and Astro Awani.

Over at the parking lot of the Cameron Highlands Municipal Council building, a crowd of over 600 gather for the Harapan ceramah, where PKR president Anwar Ibrahim and DAP secretary-general Lim Guan Eng will speak.

7:15pm: Pos Betau - Bersatu senator Isa Ab Hamid urges the Orang Asli to back Pakatan Harapan as it is the government of the day and can better serve their needs.

Isa is an Orang Kuala Orang Asli himself, who hails from Pontian.

“We need to be with the government of the day. The Orang Asli need change, and a new approach to development.

“Harapan has a better delivery system than the previous government,” he says when met at a Bersatu event.

Isa, the former Pahang Orang Asli Development Department (Jakoa) director, was first appointed a senator in 2016 while part of Umno. He defected to Bersatu last November.

“There is no point having an opposition MP in Parliament,” he adds.

The local Bersatu chapter has organised a sports fair and a karaoke competition for villagers in the Orang Asli settlement tonight.

7pm - Tanah Rata: For the first time in history, three parliamentary election candidates will be debating on live television.

The debate, organised by electoral watchdog Bersih, will take place at 9pm at Hotel Heritage. Viewers at home can following the debate on TV1 or Astro Awani.

It is understood that the debate will see the three candidates - Pakatan Harapan's M Manogaran and independents  Sallehudin Ab Talib and Wong Seng Yee - making a short speech before posing questions to each other. This process will last an hour.

The live broadcast is expected to end at 10pm before the candidates are scheduled to take questions from the floor.

However, it has been learnt that Manogaran plans to leave at 10pm to attend the coalition's ceramah nearby.

4pm - Kuala Lipis: Pahang Menteri Besar Wan Rosdy Wan Ismail hands out permits for 73 small-scale farmers, a move which he says proves that the state government has not been cruel towards those using state land illegally.

According to a report by Berita Harian, Wan Rosdy claims that the state government never disturbs such farms, even if the farm operators are not supportive of BN.

The permits allow the farmers to use land located in permanent forest reserves. Wan Rosdy explains that the permits will replace the previous practice of issuing temporary occupation licenses (TOL).

Each permit costs RM5,000 and an additional RM1,500 per hectare. Only farms that are no bigger than 2ha and have been in operation for more than 10 years qualify for the new scheme.

The authorities have been shutting down illegal farms in Cameron Highlands since 2015 as part of Ops Gading. Read Malaysiakini's special report on the topic here.

He is speaking to approximately 100 BN supporters.

Najib adds that Harapan candidate M Manogaran is not capable of defending the interests of Islam and the ummah (community), unlike BN and PAS.

He says that such interests are prioritised by PAS supporters.

“Based on this principle, surely Manogaran cannot determine the concepts of Islam and ummah.

“DAP has never mentioned the importance of ummah and Islam. On the contrary, they want to dispute many matters about ummah and Islam... As such, there is no reason why PAS supporters cannot support BN,” he said.

They are also using their personal vehicles, she stresses.

“All three of us have taken leave and come in our own vehicles.

“We are trying to avoid all controversies because this (not using government vehicles) is a standard operating procedure in this by-election,” she tells the media after attending a luncheon in this PAS stronghold.

The former PKR president adds that Harapan will need to “investigate” a claim that a deputy minister had used Forestry Department vehicles to campaign before the coalition takes any action.

“If it is really true (that) he took the vehicle, if it is wrong, it is wrong,” she says.

1.30pm: Kuala Lumpur - Election watchdog Bersih wants Pahang Menteri Besar Wan Rosdy Wan Ismail to clarify the remarks made to Cameron Highland voters yesterday, which it views as him reminding the constituents of his powers as menteri besar.

In reference to temporary occupational licences (TOL), the Jelai assemblyperson had reportedly said at an event in Habu yesterday that while he did not want to make promises, local farmers' lots would improve compared to what it is now.

"I don’t want to promise we can solve everything. You have to remember, if I can solve it, no problem! I will help."

In a statement today, Bersih expressed "grave concern" over the remark, which it says could be deemed as undue influence, an election offence under Section 9 of the Election Offences Act 1954, or even an abuse of power as defined under Section 23(1) of the MACC Act 2009.

"Bersih urges Wan Rosdy to immediately clarify his remarks and give assurance to voters in Cameron Highlands that he will carry out his duty as the menteri besar and work to resolve all outstanding issues, especially land issues, with whoever gets elected this coming Jan 26.

"Voters should not be subjected to such threat on their livelihood when casting their votes," it said.

Featuring a large image of Harapan chairperson Dr Mahathir Mohamad, it invites readers to “An Afternoon with Tun” at Felda settlement Sungai Koyan 1 scheduled for noon this Friday (Jan 25).

The advertisement highlights how the Harapan government will bring development to Cameron Highlands.

“All residents including public servants, Orang Asli and Felda settlers will enjoy clean and fair development which won’t be by political cronies.

“The Harapan government will ensure all the rakyat’s needs like housing, healthcare, roads, electricity, water supply, internet and other basic needs will be given to those who need it.

“Development for the people is ensured by the government. The Harapan administration is fair, clean and fair.

“Vote without feeling afraid. Let us develop together with the Harapan government,” it reads.

The advertisement appears on page seven of the paper’s northern region edition.

11am: Cameron Highlands - BN candidate Ramli Mohd Nor chastises his political rivals for what he says is the ruling coalition's assumption that the Orang Asli expect government handouts.

He reportedly deems such thinking as patronising to the community.

“Respect and appreciate them. They do not need handouts of any form. Do you see them nagging and begging?

“No, they believe in voluntarism, and that explains their willingness to help us in this by-election," he says in an interview with FMT.

Lim distributes spring couplets to the local community as an early Chinese New Year greeting and receives a warm welcome from the ground.

Coincidently, MCA is also here, collecting signatures from the public in opposing the abolition of the death penalty. Its members try to get Lim to sign the petition, but to no avail.

During Lim’s press conference, when asked on the issue about PAS president Abdul Hadi Awang denying that he volunteered himself to be a prime minister prior to GE13, Lim says the answer is expected.

"My answer to that question: Do you expect him to admit?” he says.

In a statement last night, Lim claimed that the reason why Hadi was 'telling lies' about DAP being anti-Malay and anti-Islam was because DAP had refused to support the PAS president as the prime minister candidate prior to GE13.