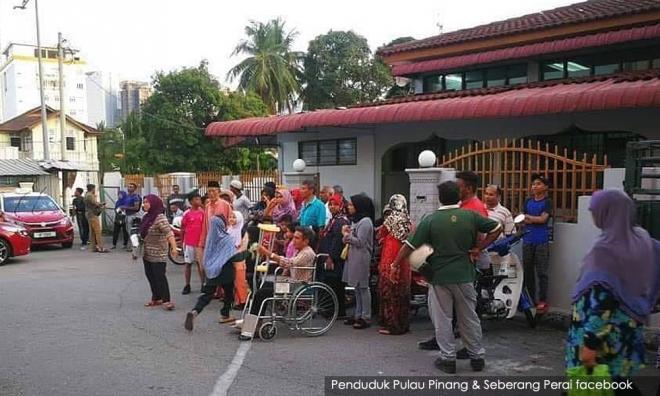 The Penang division of worker rights group Malaysian Trades Union Congress (MTUC) has called on the Penang government to reveal whether the tenants evicted from the Taman Manggis people's housing project (PPR) belong to the B40 household income group.

"As we understand it, the said eviction is being justified, amongst other issues, on the occupants’ income exceeding the limits so set by the authorities.

"On this score, the question that needs to be postulated is whether the affected people's income has taken them out of the Bottom 40 (B40) of income parity?" division secretary K Veeriah asked.

He called upon the state government to disclose the income levels of the evicted residents, to see if they belonged in the B40 household income group.

"It is also our view that, regardless of income levels, the government has a moral obligation to provide affordable housing to the middle and low-income wage earners of the nation," Veeriah told Malaysiakini today.

"We, nevertheless, take cognisance of the fact that it is easier said than done," he added.

Several of the 22 residents who lost their eligibility for the PPR homes on Jalan Burma resisted their eviction on March 6.

A group of them also staged a protest at Komtar, where Penang government offices are located.

Abu Bakar, who will be submitting a report to Mahathir on the matter, called on all quarters not to fall for unverified stories about the eviction.

Reasons include defaulting on payments for rental and maintenance charges; increase in income which exceeded the cap of RM1,500 per household; being married to foreigners; or being found to own other properties.

Jagdeep also cited the waiting list for PPR units in Penang, which currently has 1,137 applicants, including 494 for Taman Manggis alone.

He added that there are 999 PPRs in the state.

However, Veeriah (photo, above) said the reasons cited by Jagdeep did not justify the state government's eviction of the Taman Manggis residents.

"Whilst the state government is determined (to continue) the massive creation of man-made islands in the name of bringing development, where is the focus on affordable homes that are to be built on the said reclaimed islands?" Veeriah asked.

"It is obvious, in our view, that the state is paying lip service to the plight of the B40 and M40 segment of the citizens as opposed to the interest of the capitalist class."

Veeriah demanded that all evicted tenants be given back their Taman Manggis PPR units.

"We also call upon the state to give utmost consideration in providing for affordable homes for the B40 and M40 in the state," he added.