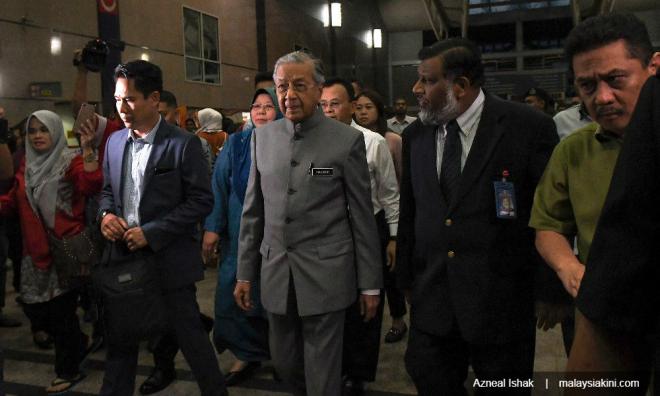 PM says no emergency declared for Pasir Gudang, and 6 other things that happened yesterday

1. Prime Minister Dr Mahathir Mohamad stressed that there is no need to declare an emergency in the wake of the Pasir Gudang toxic chemical waste pollution crisis, as the situation was under control.

2. International Trade and Industry Minister Darell Leiking appealed for proof that Approved Permits (AP) have been abused, vowing to 'ketuk kepala' (knock the heads of) wrongdoers.

3. Election Commission chairperson Azhar Azizan Harun said the EC will review the redelineation of electoral boundaries approved last year, to see if needs to be nullified or not.

4. The organisers of last Saturday's Women's March said they are being probed by the police under Section 4(1) of the Sedition Act 1948, and Section 9(5) of the Peaceful Assembly Act 2012.

5. Kelantan recorded the most number of marriage applications under the age of 18 made through the Syariah Court, with 140 submissions received from Jan 1, 2016, to Dec 31, 2018, according to data provided to Parliament.

6. DAP’s National Legal Bureau chairperson Ramkarpal Singh said the attorney-general's decision to continue with the murder charge against Vietnamese Doan Thi Huong, while dropping the one against her Indonesian co-accused Siti Aisyah in the Kim Jong-nam murder case, is 'mind-boggling'.

7. Minister in the Prime Minister's Department Liew Vui Keong said the government has no intention to sue investment giant Goldman Sachs Group Inc or any other parties in the US over the funds taken from state fund 1MDB, as the focus now is on local proceedings pertaining to the case.