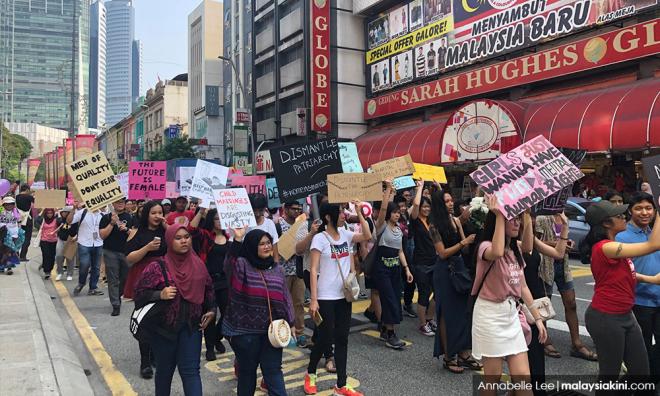 IGP: Women’s March organisers did not give notice within 10-day timeframe

Inspector-general of police Mohamad Fuzi Harun has alleged that the Women’s Day March organisers had not given due notice for the gathering within the stipulated 10 days.

As such, he said investigations are being conducted as the organisers did not adhere to protocol.

“They (organisers) did not give notice within the (10-day) period. That is why we did not give permission and it went against (protocol).

“That is why investigations are still ongoing,” he said during a press conference at Pulapol in Kuala Lumpur.

He was speaking following the handing-over of duties to new acting deputy inspector-general of police Abdul Hamid Bador this morning.

Those involved will be called in to give their statements, he added.

The march had taken place in Kuala Lumpur on March 9 in conjunction with International Women’s Day.

However, the presence of LGBT activists created a backlash, inviting criticism from within the government and opposition.

Organisers had previously insisted that they had informed police about the rally 10 days ahead, on Feb 25, in line with the Peaceful Assembly Act.

Former deputy IGP Noor Rashid Ibrahim, who Abdul Hamid has now replaced, had also previously stated that police have opened investigation papers into the march as it had not obtained police authorisation to proceed.

It was also reported yesterday that police are investigating the organisers of the march under Section 4(1) of the Sedition Act 1948.

If convicted under Section 4(1) of the Sedition Act, a person can be slapped with a three-year jail term, or RM5,000 fine, or both.

Meanwhile, when asked about lawyer Syahredzan Johan’s call for police to drop its investigations against the organisers, the police chief pointed out that more than 50 police reports had been lodged against the march organisers.

“On our side (police), we have received over 50 reports and so investigations must be carried out.

“The job of the police at this point is to complete the investigation papers as fast as possible and submit them to the deputy public prosecutor for further decision.

In a statement yesterday, Syahredzan, who is also the political secretary to DAP lawmaker Lim Kit Siang, called on police to cease its investigations against the organisers of Saturday's march.

He deemed the police probe “unwarranted and unnecessary", adding that it encroached upon the rights of the event organisers.