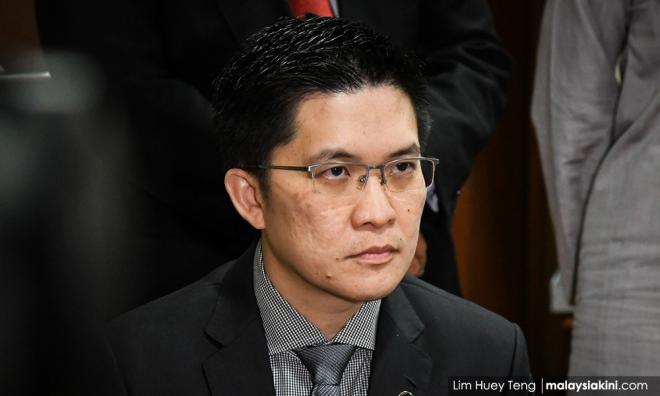 What are you afraid of, DAP rep chides Najib

He claimed that Najib's actions show that he merely wanted to create a perception of eagerness to face trial by backing a call to have it broadcast live, even as he repeatedly sought to avoid trial.

"At the time, Najib appeared to display his bravery, confidence and eagerness to face his upcoming SRC trial and that it would prove him innocent. Surely many were impressed by his 'nothing to hide' attitude at the time.

"And yet, in less than 24 hours, Najib's actions reveal his true face. His lawyer Harvinderjit Singh told the court that his client has applied for a judicial review of the Federal Court decision not to allow the SRC case to be postponed...

"Such a big 'U-turn' by Najib is surely not in-line with what is expected of someone who has been calling himself 'Bossku' lately. Now is the time the people ask Najib: What are you afraid of?" Wong (photo, above) said in a statement last night.

Najib should have taken the Federal Court decision, Wong added, as an opportunity to expedite the SRC case and prove through the legal processes that he is innocent.

On March 27, a seven-member panel led by Chief Justice Richard Malanjum lifted the stay of proceedings that Najib had earlier obtained to stall the hearing against him.

Until then, the proceedings had been halted pending the disposal of his appeals over interlocutory matters.

His trial on charges related to SRC International Sdn Bhd - which would have been the first of several corruption trials against Najib - was slated to begin tomorrow (Wednesday, April 3).

However, Bernama reported that Najib had applied for a judicial review of the Federal Court decision yesterday, but no date has yet been set for case management.

'Trial in any court is not allowed to be broadcast live'
1 Apr 2019
Foreign political donations not bound by local tax laws, insists Najib
1 Apr 2019
Prosecution wants CJ to postpone 1MDB case to 'give way' for SRC trial
29 Mar 2019
Anwar in favour of live telecast of Najib's money-laundering trial
1 Apr 2019