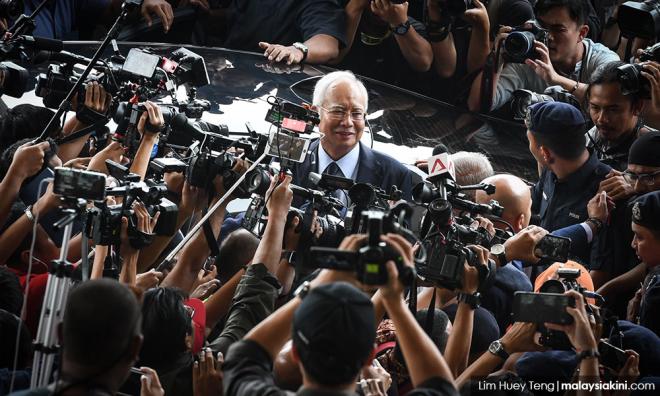 Yoursay: Najib, be a man and prove your innocence in court

YOURSAY | 'The judiciary must wise up to Najib's tricks and not fall for this latest attempt at scuttling the trial.'

Panorama123: The decision to begin the SRC trial was made by a seven-person Federal Court bench headed by the chief justice himself and they are re-appealing again for a postponement on the eve of the scheduled trial (which is to begin tomorrow)?

There should be no compromise - this SRC trial must begin soonest possible. Even the judiciary has already agreed to a delay in the 1MDB trial to give way to the SRC trial.

The rakyat will salute the judiciary if all these public interest trials can be concluded with expediency.

Oxymoronictendencies: Former PM Najib Razak, be a man! Stop your delaying games. The longer you delay the inevitable, the worst it will be.

And you know it’s easy to prove the SRC charges, don’t you?

You should have repaid the money when it first came to light that you had it. Your failure to repay the SRC money goes to demonstrate your incredible greed, arrogance and mistaken belief in your own indestructibility.

Clever Voter: To the men on the street, Najib’s request for yet another postponement means he is terrified of standing in the dock.

He is not afraid and unashamed to allegedly raid the nation's Treasury. Yet he is embarrassed to even face the court.

Many would have preferred the government to just lock him up without bail if he continues with his habit of running away from facing justice. He is a coward after all.

The judiciary must wise up to his tricks and not fall for this latest attempt at scuttling the trial.

Delaying the trial is delaying justice for the victims of Najib’s kleptocracy, who are the people of Malaysia.

Anonymous 770241447347646: How many people understand the legal language and procedures of a courtroom trial?

Why give Najib an opportunity to use this court case to his advantage? Like how he is winning the media war among the illiterate.

Even after the massive damage done, and if it had continued for another five years, these illiterates would have paid a very high price. Yet, today they are lifting him high on their shoulders.

Same if this case is telecast live, it also can be used to fool these same illiterates, that he is being abused by the justice system. Najib knows these people can be manipulated.

Let those who have knowledge of the legal system handle the case. He knows he cannot fool them unless they want to be fooled.

Ozzie Jo: Yes, no live telecast, please. It is a trial, not a movie.

By all means, allow photos of him sitting in the dock, but don't make a mockery of the trial by trying to turn it into a Hollywood blockbuster.

Cogito Ergo Sum: Najib’s lawyer Muhammad Shafee Abdullah is a great actor and will play to the gallery and not address the facts.

His theatrical skills are well known and people with no knowledge of the law will be mightily impressed.

The facts will be too complex for ordinary folk to understand and the trial will be Shafee’s opportunity to make the whole matter a personal show.

No, don’t follow Najib’s game plan. He has already thought this out and has planned for it.

Cicak Boy: This is a case of immense public interest involving the alleged theft of huge amounts of public funds, so please broadcast it live.

This will also serve as a warning to other public officials who are in control of public funds.

Vgeorgemy: We had seen how the accused reacted by escaping through a “tunnel” in Parliament when he was confronted with his misdeeds in a building deal.

Here in the full glare of live telecast, he is not going to escape this time around from telling the truth.

Aggressive questions by the best legal mind of this country will be thrown at him. We would say all the legal proceedings should be taped and released online for the population to see his culpability if that is what the accused wants.

We have full confidence in our prosecutors and the court’s capability in dealing with him.

'Trial in any court is not allowed to be broadcast live'

Panorama123: An absolutely correct decision (not to allow the trial to be broadcast live).

More importantly, our judiciary must commit to the closure of trials of public interest in an expedient manner. Unnecessary adjournments should not be allowed.

Lawyers should not undertake too many cases that can impede on important trial dates, etc. Their assistants (other fully qualified lawyers) can undertake other cases if they want to focus fully on their important cases.

We need to uphold the integrity of our judiciary system to be the envy of the international community.