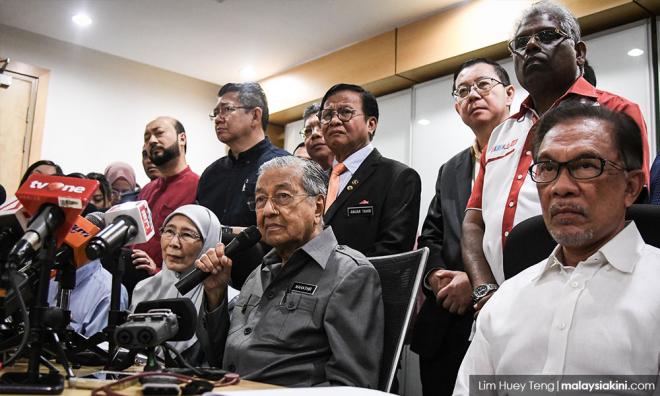 Prime Minister Dr Mahathir Mohamad suffered a significant slide in public approval, down by 37 percentage points, as the Pakatan Harapan coalition approaches one year in office, according to the Merdeka Center.

Releasing the result of their March survey today, the Merdeka Center revealed that Mahathir, who scored a high of 83 percent last May not long after taking office, has seen his popularity almost halved to just 46 percent.

This also represented a sizeable drop from the 71 percent approval rating he scored in August last year as Pakatan Harapan approached 100 days in government.

This was, however, marginally better than the dismal 38 percent rating obtained by Mahathir’s predecessor Najib Abdul Razak in April last year just prior to GE14.

The ruling coalition did not fare any better with the pollster revealing that approval rating for Harapan government fell from 79 percent to 39 percent from May 31, 2018, to March 11, 2019.

Heading in the wrong direction?

The deterioration in public satisfaction was in tandem with the increase in percentage of those polled who felt the country was “headed in the wrong direction” - from 24 percent in August last year to 46 percent last month.

Meanwhile, the number of those who felt otherwise dipped from 55 percent in August 2018 to 34 percent in March this year.

Of the different ethnicities, confidence among Malay voters was lowest with just 24 percent thinking Malaysia was on the right track, while Indians were the most positive, with 63 percent agreeing that it was.

Interestingly, respondents in East Malaysia were also more confident, with 41 percent feeling the country was headed in the right direction, nudging past the 35 percent that replied in the negative.

The same went for respondents in the higher household income bracket of RM7,000 and above with 54 percent of those polled answering in the affirmative compared to 33 percent.

However, the opposite was true for respondents in both rural and urban areas, and in Peninsular Malaysia as a whole with the percentage of those who felt the country was heading the wrong way surpassing those who felt differently - at 45 percent, 48 percent and 48 percent respectively compared to just 37 percent, 30 percent and 33 percent.

Confidence was also low among those in the lower household income bracket, specifically those earning between RM2,000 and RM3,999 and below RM2,000. Of these, 54 percent and 51 percent respectively felt the country was headed in the wrong direction while just 30 percent of both felt otherwise.

“The decline in ratings is likely to be attributable to three factors, i.e. the condition of the economy as it is perceived by ordinary consumers, the perceived performance of the administration and concerns over Malay rights and privileges as well as fair treatment of the other races in Malaysia,” Merdeka Center explained in an accompanying statement.

However, it also noted that the majority of respondents felt that the government should be given more time to fulfil the promises made in its election manifesto.

It said: “Despite the declines registered above, the same survey also found that an overwhelming majority of voters (67 percent ) agreed that the administration should be given more time to fulfil its election promises.

“This figure also includes a majority 52 percent of Malay voters who had largely been more critical of the new administration.”

The Merdeka Center poll was conducted from March 5 to 11 and involved a pool of 1,204 voters aged 21 and above which the centre said was reflective of the national electoral profile.