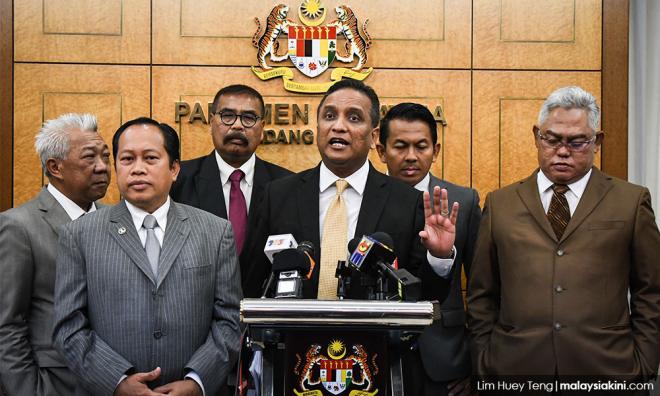 Yoursay: Reezal mocking the law by accusing AG of treason

YOURSAY | ‘Gov’t must deal with Umno MP firmly as the accusation is no trivial matter.’

Mo Saladin: It is a wonder how former foreign minister Anifah Aman and Wisma Putra put up with Reezal Merican Naina Merican as deputy minister.

That aside, it is very clear that Reezal has either very poor knowledge of the constitutional roles involved in ratifying international treaties, or is deliberately trying to distort the facts to cause further tensions in the country.

Furthermore, to accuse no less than the attorney-general (AG) himself of treason is not a trivial matter, and Reezal should be dealt with firmly by the Pakatan Harapan government.

Ramesh Nair: It’s amazing that people quote the Rome Statute of the International Criminal Court (ICC) without even understanding its contents.

Even if you ratify it, you can make certain reservations to ensure our constitution is upheld.

It’s an absolute mockery of the law what some people do to dupe the people using race and religion for their political and personal aspirations. The worst part is that some people do believe them and turn up to rallies in hordes.

No one should be above the law. Yes, even the royalty should be subject to the law.

Anonymous 770241447347646: What loyalty is Umno talking about? What treason are they talking about? A nation is nearly leased out to some foreign country, a portion of it sold. Is that not treason?

How can these same people sing Negaraku when they do not even know the meaning of it, or even have space in their hearts for it?

The only space that they have in their hearts is for money and power. That also comes at any cost, even at the extent of destroying this nation financially.

Umno and PAS should stop even raising the subject of treason, as they do not even understand the word or are purposely trying to feign ignorance.

Shahzamani: To this Umno politician, lying to the rulers is called loyalty. Speaking the truth is called treason. Surely this is upside-down logic.

No wonder Malaysia was topsy-turvy under Umno rule. We are still experiencing the aftershocks one year after Umno was booted out.

RR: Calling on Tommy Thomas to resign as the attorney-general and saying he has committed treason for talking about the Rome Statute at a Universiti Malaya forum is absurd and illogical.

As attorney-general, he is also the lawyer for the government and is duty bound to give clarifications.

One should listen to what the learned former minister Rais Yatim said, which is that four law professors have wrongly advised the rulers on the statute, especially on the subject of rulers’ immunity, and hence the rejection of the statute by the Agong.

So who has committed treason? The attorney-general or the law professors?

Malaysian-United: If a thief receives RM1 million in his bank account and does a bank transfer of the entire RM1 million to others, and when the police raid the thief's house and finds another RM2 million cash under his bed, do you think the police will not seize it?

Former PM Najib Razak, please tell your "confused" friend not to be confused.

A thief does not have to rely on his bank account to receive stolen money. He can use other means and other people's bank account to do that, or even be paid in cash without going through the banks.

So why did the police file for civil forfeiture to hold on to the millions in assets seized from Najib's residence? It's because they believe those were stolen by Najib. And their belief is well-founded because Najib is allegedly a kleptomaniac.

I hope this clears up his friend's "confusion".

Vgeorgemy: The accused’s friend’s question clearly showed the quality of our education.

The question to the accused should have been the source of funds to acquire the valuables and currencies totalling RM711 million?

And does the accused have any Customs documentation on the importation as personal items and gifts? Which country’s diplomatic bags carried such huge quantity as gifts?

Takung: By the way, can a minister or prime minister keep presents from foreign dignitaries? Aren't these presents owned by the state?

Rupert16: I have no doubt that the question is drafted by one of Najib’s lawyers or one of his minions.

It’s all a set up to give the impression, especially to Najib’s blind loyal supporters and the rural folks, that Najib is as clean as a whistle, but we all know it’s far from the truth.

Wira: Forget about the balance of money in and out of his private bank account and focus how on earth could a PM amass so much wealth (RM700 plus million) in properties and luxurious goods over his lifetime as an elected representative where his maximum remuneration as a PM and MP was at around RM35,000 per month.

The law on corruption must be changed (if they have yet to be) to make it unequivocally clear that any government official, elected or otherwise, who lives beyond his means is guilty of corruption unless proven otherwise.

That's why it's imperative that such officials must declare their income and assets prior to acceptance of executive positions in government.

Well Thats Fantastic: Najib seems to have lost his mind, not only is he referring to himself as his friend, but he doesn't remember why he is in court every day for the SRC scandal.

Yoursay: He who stole from rakyat has committed treason, not AG