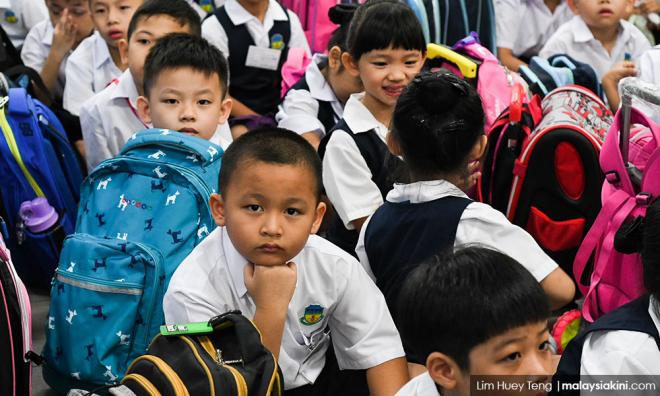 DAP Youth has rebuked its counterpart in Bersatu for suggesting that vernacular schools should be dissolved before there is any discussion about the race quota in the matriculation programme.

"DAP Youth does not agree with the rhetoric mixing the existence of vernacular schools with the matriculation quota," it said in a statement today.

"Vernacular schools have never discriminated against and has welcomed all races, be it Malays, Chinese or Indians, and there is no quota."

The statement was endorsed by 15 of DAP Youth's 25 exco members, including deputy chief Chiong Yoke Kong. However, DAP Youth chief Howard Lee was not among the signatories.

DAP Youth added that this is in contrast to the matriculation programme, which reserves 90 percent of available spaces for bumiputera students, and the remainder for non-bumiputera.

"According to the United Chinese School Committees' Association of Malaysia (Dong Zong), Chinese vernacular schools have 520,000 students in 2019, of which 18 percent or 90,000 are Malays, which shows that vernacular schools are accepted by all," it said.

The statement was issued in response to Bersatu Youth exco member Muzzammill Ismail's unhappiness with MCA, Gerakan and DAP for criticising Education Minister Maszlee Malik over the matriculation quota.

"If we want to discuss justice, don't challenge the openness that is granted. If not, dissolve vernacular schools – then we can discuss the matriculation quota," Muzzammill had said.

DAP Youth added that every student should be accorded equal educational opportunities.

"The new government in Malaysia Baru should not be trapped in the old framework, and should move forward with an inclusive policy that does not discriminate."

Gerakan urges gov't to abolish matriculation
13 May 2019
Umno rep's view is the one destroying unity, not vernacular schools: Gerakan
17 Apr 2019
Academic says Maszlee should be defended from 'DAP attacks'
20 May 2019
MP ‘baffled’ by Maszlee linking matriculation to Mandarin requirement
17 May 2019
Maszlee: Increased matriculation intake historic, win-win for all
29 Apr 2019