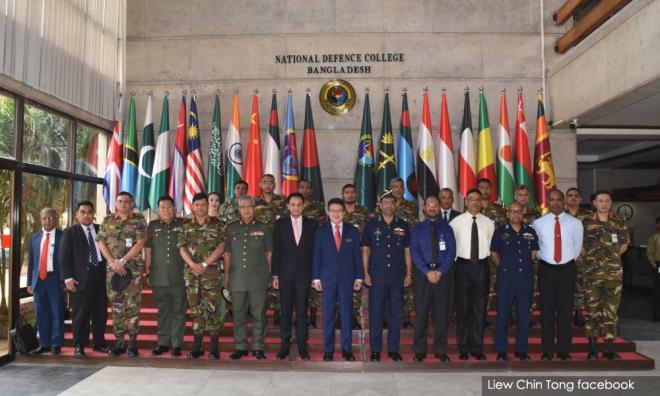 The potential for defence cooperation between Malaysia and Bangladesh was among the topics discussed in a recent meeting between Deputy Defence Minister Liew Chin Tong and the Defence and Security Adviser to the Prime Minister of Bangladesh Tarique Ahmed Siddique.

Liew's office said in a statement today that the two countries also discussed issues pertaining to the operation of the Malaysian Field Hospital (MFH), Bangladeshi workers’ problems in Malaysia, and the rapidly developing Bangladesh economy.

These were among the matters discussed when Liew paid a courtesy visit to Tarique in conjunction with his visit to Bangladesh from May 14 to 17.

According to the statement, Liew was invited to deliver a speech titled “US and China relations in a multipolar world” to 100 officers at the Bangladesh National Defence College.

Liew, who was making his first official visit to Bangladesh, was also briefed by Steven Corliss, a representative of the United Nations High Commissioner for Refugees (UNHCR) for refugees in Dhaka, on the situation faced by Rohingya refugees at Cox’s Bazaar.

The statement said the visit was to show the government’s support for the Malaysian armed forces health services at the MFH, which has been in operation since December 2017 to help Rohingya refugees at the refugee camp in Ukhia.

“Our personnel are honouring Malaysia’s name in rendering humanitarian aid, and their efforts are a platform for the Malaysian government to help the Bangladesh government and the international community in managing this crisis so that it will not worsen and become a regional crisis,” it read.