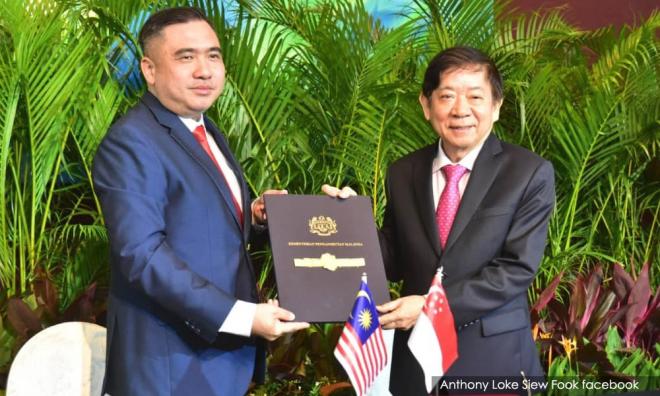 Speaking to the media after inking a suspension of the project with his Singaporean counterpart Khaw Boon Wan, Loke said the six-month deferment would allow Putrajaya more time to consider cost-reducing options for the RTS Link, previously estimated to be worth RM4 billion.

“We have taken this approach to renegotiate the project because we believe it can be done at a more effective cost, and we also hope that the cost will be undertaken by private parties.

“This project was previously a government project under the former (BN) government, and Prasarana was supposed to bear the construction costs.

“But we now hope that private parties will bear the construction costs and even operate it,” he said.

Pressed if any private companies had been identified to undertake the project, he answered in the negative and stressed the need for further discussions with Singapore.

Meanwhile, Bernama quoted the minister as saying that the government has received various proposals from the private sector.

“Yes, we are in talks with some private investors. There are various proposals. We are still looking at those proposals,” he said.

Aside from pursuing the privatisation option, Loke said Malaysia will use the next six months to study the project’s existing terms in order to bring down the eventual RTS Link fare.

“What we want to see is not only a completed project, but also lower fares for passengers.

“The fare structure agreed to previously is quite high – RM15 for a one-way ticket.

"We believe this will be a burden to Malaysians, especially to those who commute to Singapore to work every day."

The transport minister also said that both countries will work on exploring cheaper and sustainable alternatives to address traffic congestion at the Singapore-Malaysia border.

“These include new initiatives, such as improvements to the physical infrastructure at the border, a review of inter-boundary policies and regulations, and enhancing the quality of cross-border services,” he said.

Singapore agreed to suspend the RTS Link project until September 30, on the condition that Malaysia pays RM2 million in abortive costs. Loke said the payment will be made before July 30.

The 4km RTS train line was planned to link the Bukit Chagar station in Johor Bahru with the RTS Link Woodlands North station in Singapore via a 25m-high bridge across the Straits of Johor.

It was recently revealed that a plot of federal land in Bukit Chagar required for the project had been transferred to Johor ruler Sultan Ibrahim Sultan Iskandar in 2017 under the previous BN administration.

The land transfer was done two days after the state ruler had publicly expressed “serious reservations” about the RTS Link alignment.

In response, Sultan Ibrahim said he was unaware if he owned any land involved in the RTS Link project, and was willing to surrender it to the government at zero cost.