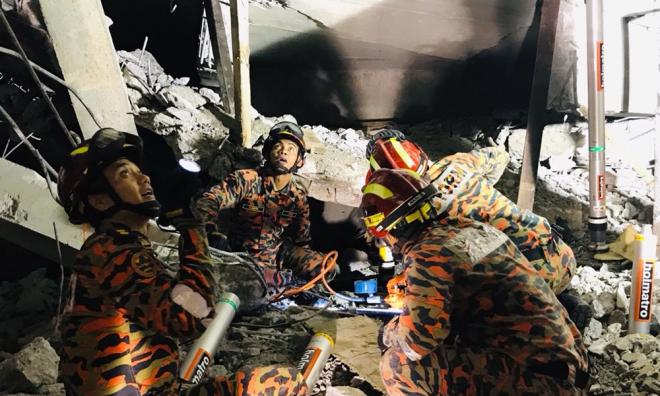 The bodies of a married couple were found in embrace underneath the concrete rubble of the collapsed building next to the Gombak LRT Terminal in Taman Melati.

In the 1am incident yesterday, the Indonesian pair, identified as Alias, 36, and Ima, 40, were believed to have been crushed by falling iron beams, Gombak district police chief ACP Samsor Maarof said.

The construction workers were found dead and in each other's arms at 1.10pm, about 40 metres from where three of their colleagues were rescued.

“The couple's disappearance was only realised by a fellow worker after he tried contacting them on their phones.

“Rescuers found their bodies stuck under concrete rubble and steel beams, but the process to extricate them proved difficult,” he said when met at the scene of the incident today.

He said the bodies were finally pulled out at 2pm and sent to the Kuala Lumpur Hospital for post-mortem.

All workers have also been ordered to evacuate their workers' quarters (rumah kongsi) for investigations to take place.

“The project's safety officer has been told to shut down the workers' quarters,” he said.

Meanwhile, Kuala Lumpur Fire and Rescue director Nordin Pauzi has not ruled out weak structure as among the possible causes of the collapse, but added the matter was still under investigation.

In the incident, three construction workers were injured after a multi-storey car park under construction at the Gombak LRT station in Taman Melati collapsed early yesterday morning.

They were pulled out by rescuers after being trapped under the rubble.