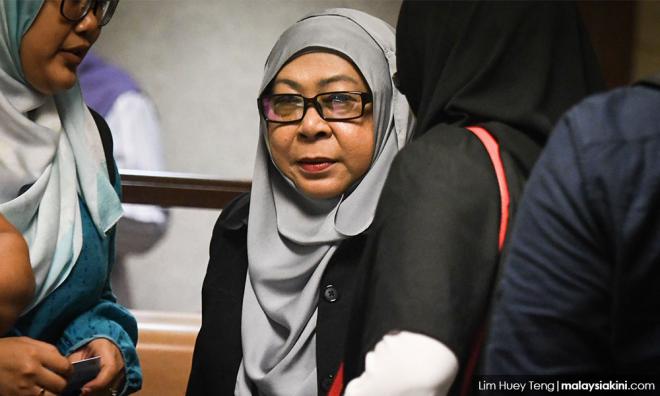 The warrant of arrest issued against the former director-general of the Malaysia External Intelligence Organisation (MEIO), Hasanah Abdul Hamid, was cancelled by the High Court today.

Justice Sequerah had also ordered Hasanah and one of her two bailors to be present in court at all times during case management.

Hasanah and her two bailors were present in court today.

The warrant of arrest was issued by Justice Sequerah on May 24, after Hasanah and her bailors failed to appear in court for case management without giving any reason.

Earlier, Shaharudin told the court that his client offered her unconditional and unreserved apologies for not being present during the case management on May 24.

“Having stated the position, we respectfully submit that case management is not a trial, and there was no legal basis to issue an arrest warrant against the accused in case management.

“Further, in all fairness, there was no pressing need to seek an arrest when the accused has lawfully posted a massive bail of RM500,000,” he said.

Muhamad Iskandar replied that according to Section 172B of the Criminal Procedure Code, the presence of the accused during case management is required by the law.

Hasanah was charged in her capacity as a civil servant, that is as the director-general of the Reseach Division in the Prime Minister’s Department, with committing CBT involving US$12.1 million (RM50.4 million) belonging to the government between April 30 and May 9 last year at the office of the director-general, Research Division, Prime Minister's Department, Putrajaya.

The charge against her was framed under Section 409 of the Penal Code, which provides for a maximum jail term of 20 years and whipping and fine, upon conviction.