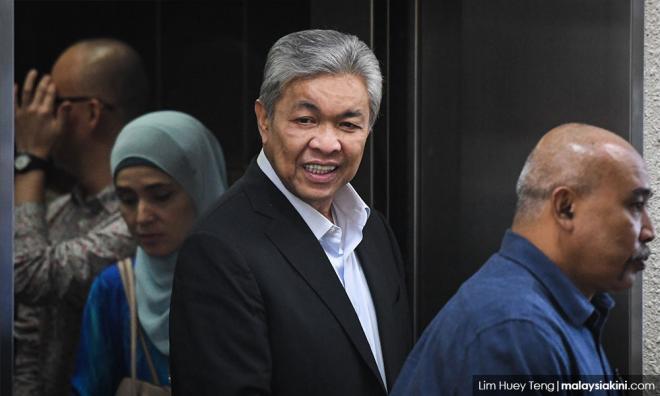 YOURSAY | ‘The three courts cannot be wrong to reject his ‘passport for umrah’ application.’

Anonymous_49d8b96c: Whatever that is said outside the court by the accused is irrelevant. The accused person has to answer to every single charge filed against him in the court of law.

I wonder if other accused persons could have such privileges and deep pocket to seek three different courts to just hear his “passport for umrah” application. The three courts cannot be wrong to reject his application.

Compounding the passports of all accused persons who are charged with corruption-related crimes is the right thing to do.

They probably can’t enjoy their stolen loot which is stashed and hidden outside Malaysia. It must be very frustrating for this group of accused persons.

Perhaps, Zahid thinks that by playing the race card, he might still endear himself to his party base. Or maybe he should rethink his strategy, and come out storming through the gates ala his ex-boss. Maybe, Zahid should also consider a nickname and a hashtag. I'd suggest #Saya pun tak malu, boss.

Now you know why Zahid must never be given the reins of power, ever. For, he sure could feign humility by dressing to look like it. And we all know how arrogant he used to sound when he did have the power.

Kural: Yes, it is quite irresponsible and full of ill intentions for him to insinuate that the “minority controls the majority”.

Many would argue that it is those like him who divided the majority community by robbing them of their legitimate share of wealth from hard work by Umno leaders’ corrupt practices and subsequently blaming the minority communities.

Many would say that it serves him right to face allegations of misuse of power and corruption,

Wira: Zahid, at least there is a significant minority among the Malays who wanted thieves out of government. If that didn't happen, I don't know how God could have saved Malaysia.

FairMalaysian: "Minority controls the majority" - what a plain silly statement. And such spurious claims and lies during a holy month.

In short. he is telling the Malay/Muslims of Umno and PAS are better Malay/Muslims than those from Bersatu, Amanah, PKR and Warisan because according to Abdul Hadi Awang's edict, Umno Muslims can steal and lie.

What a world - the minority controls the majority. Don't you cheats not happy to have inflicted untold damage to this country and people? Remember, what goes around will come around.

At this elderly age, you and Najib should do at least some good to the people, instead of playing opportunistic dirty politics. Don't you people have any conscience at all?

FlabberPro: What is the point of going to Mecca when all your 'blessings' are allegedly stolen loots from the country's coffers? As a so-called righteous person, shouldn't you at least returned what you have allegedly stolen?

Does that mean that when all the 42 charges brought against you are dropped - that would be called righteous and fair? Are you still adamant today that you were once a clean government, corruption-free?

Repentance and genuine forgiveness from God can happen anywhere. There is no point going to Mecca when your life is in such a shambles.

Ask God for forgiveness, and ask the rakyat of Malaysia whose trust you have betrayed to forgive you. Then, we will all give our blessings to you to go to Mecca.

LetTruthAndJusticePrevail: Indeed, there is no point going to Mecca to cleanse what that cannot be cleansed.

If ever you have any conscience and good morals at all, just do soul searching, ‘insaf dan bertaubat’ whatever and any wrongdoings you may have committed.

That would even be much more meaningful, pure and sincere than going to Mecca. Why not for once, have the decency and responsibility to answer and clear those charges against you and free yourself of any ‘encumbrances’.

Redmann: These are the types who were born with defective DNA as evidenced by the fact that they have zero conscience.

These are the types who entertain the thought that crime pays. They subscribe to the fact that they are perfect purloiners.

Now, they wish to go for prayers when they set out to be preyers right from the beginning.

And how will this help you, Zahid? That all Muslims are united in believing that you should not be charged in court for the numerous cases of corruption and money laundering?

That Najib, Rosmah Mansor, Tengku Adnan Tengku Mansor et al should all be pardoned because they are Muslims? Dream on.

GalaxyM: This alleged crook is still unrepentant and arrogant. He never admitted his unforgivable wrongdoings and misdeeds.

Being charged with more than 40 cases of corruption and money laundering by the court, he audaciously blames his pathetic situation on the minority community and unashamedly and habitually called for the unity of Muslims as if it is the panacea to lift him out of his impending doom and gloom.

It is the hope of most Malaysians to see quick action of justice and ensuing punishment to befall this shameless alleged crook so that the country is rid of such corrupted leaders.

Clever Voter: A similar storyline. Pretending to unite the Malays when he is the one laughing all the way to the bank should be a reason why he should be removed.

yoursay
ahmadzahidhamidi
Related Reports
MACC to call Zahid, Hisham to assist land swap probe after Raya: Sources
30 May 2019
Najib does not want M'sians to remember the lessons of history
30 May 2019
Zahid not interfering in Umno while on leave, assures Ismail Sabri
29 May 2019
No reason for Zahid to gloat about his path to No 2: Kit Siang
26 May 2019