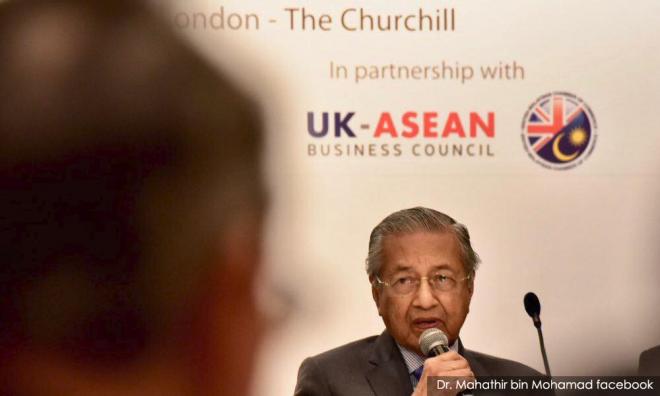 Malaysia can achieve a gross domestic product growth of above five per cent this year despite the current projection of between 4.8 to 4.9 per cent, says Prime Minister Tun Dr Mahathir Mohamad.

He noted that while changes in government in other countries would trigger riots and street demonstrations to bring the government down, this has not been the case in Malaysia.

“In Malaysia, the transition is smooth and we are able to continue with the projects and handle the projects left over by the previous government, and we could formulate new strategies or even use old strategies that used to work for us before,” he said at “the Future of Malaysia and Asean” session held in conjunction with the Asean Business Summit in Bangkok, Thailand.

Mahathir said old strategies that used to work before include the Look East policy, being able to be practically friendly with all the countries in the world without considering their political ideologies, and not interfering with other countries’ internal affairs unless they were doing something very wrong.

On fiscal consolidation, he said it is coming along fine, despite the government being left with an RM1 trillion debt.

“We are still able to run the government and pay salaries the way we used to do,” he said.

On reform of government-linked companies (GLCs), he said changes in some of these companies are unavoidable and had to be made as they are suffering losses as they were headed by politically-linked individuals.

With the new government now, most of the GLCs are headed by professionals with only one or two politicians who are qualified appointed as board members but not as chairmen.

On whether the government would seek to double the dividend payout to it from Petronas next year, Mahathir said it would depend on how much the company would be making.

He added the government is also looking at improving the performance of GLCs by changing their structures and directions, removing companies that are not needed and selling some to the private sector.