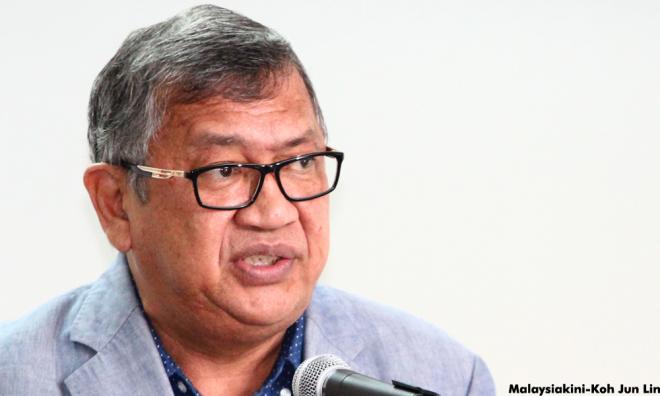 No action on the 2015 removal of Gani Patail, others

PARLIAMENT | The government will not be taking any action on the 2015 removal of then attorney-general Abdul Gani Patail and other government officers, purportedly to shutter investigations into the 1MDB scandal.

Deputy Minister in the Prime Minister’s Department Hanipa Maidin was referring to the ousting of Gani (photo, above) and several BN ministers - including current Home Minister Muhyiddin Yassin - and transferring out of officers from the MACC believed to be involved in probing the beleaguered sovereign wealth fund.

This took place between July and August 2015, the period that Lim Kit Siang (Harapan-Iskandar Puteri) refers to as the “Week of Long Knives”.

In a written reply to a question from Lim yesterday, Hanipa, the de facto deputy law minister, said: “At this stage, the government does not plan to take action in regard to the expulsion of the (then) attorney-general and government officers acted on in July and August 2015.

“Even so, the government can consider taking appropriate action if there is a need to in the future, or if there is any information or clear evidence there had been attempts by any party to close investigations on the 1MDB scandal.”

Lim had asked if the Pakatan Harapan government would investigate the matter.

In July 2015, the former BN-led government removed Gani, who was then heading a special task force to investigate the billions in former prime minister Najib Abdul Razak’s bank accounts, from office on health grounds.

Najib was being investigated for receiving RM2.6 billion (US$681 million), purportedly a political donation from the Saudi royal family, as well as RM42 million originating from SRC International, a former 1MDB subsidiary.

Najib appointed Mohamed Apandi Ali as a replacement, who went on to clear the former of any wrongdoing with regard to the money in his bank accounts.

Also at that time, Muhyiddin, who was deputy prime minister, and rural and regional development minister Mohd Shafie Apdal were dropped from the cabinet, while several MACC officers investigating the case were arrested and a number of others transferred out.

Najib is currently on trial after being slapped with a slew of graft charges pertaining to SRC International.