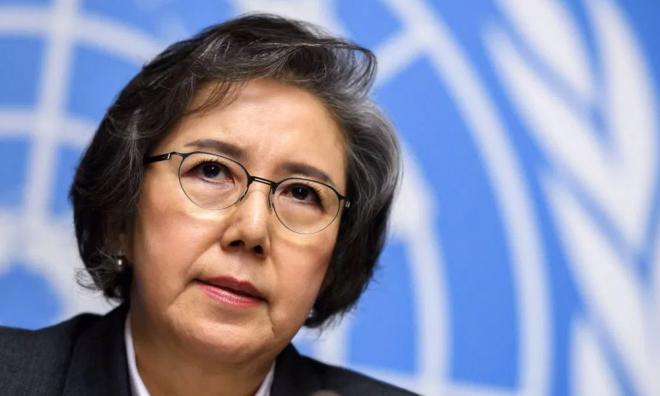 The United States banned Myanmar military commander-in-chief Min Aung Hlaing, three other senior commanders and their families from entering the US in the strongest steps yet taken by Washington in response to the massacre of Rohingya Muslims in Myanmar.

Lee said a travel ban was not enough and called for the commanders’ assets to be frozen.

“They were never going to travel to the US... let’s be realistic,” she told reporters in Kuala Lumpur.

A US State Department spokesperson defended the actions taken against members of Myanmar’s military and called on others to do the same.

“We remain focused on actions that will change the behaviour of the Burmese military, hold those responsible for atrocities and other abuses to account, provide justice to victims, and support democracy and prosperity in Burma,” the spokesperson said.

Lee said the sanctions – applied, in addition to Min Aung Hlaing, to his deputy Soe Win and brigadiers-general Than Oo and Aung Aung – should be extended to two more military leaders identified in a UN investigation report in 2018.

The report, compiled by the Independent International Fact-Finding Mission on Myanmar, had called for the six generals to be tried for genocide.

A military crackdown in Myanmar in 2017 drove more than 730,000 Rohingya Muslims to flee to neighbouring Bangladesh, according to UN figures.

The US State Department so far has stopped short of calling the abuses genocide.

Such a declaration could require Washington to impose stronger sanctions on Myanmar, where the United States has competed for influence with China.

“The outcome of this request is still pending and is before the court’s judges,” said Stewart, adding that he was visiting Bangladesh as part of a delegation from the Hague-based ICC to explain the judicial process to the government and other parties.

Bensouda said last month she would ask ICC judges for permission to investigate crimes that had “at least one element” in Bangladesh.

Bangladesh is a member of the ICC, but Myanmar is not.

Lee, speaking in Kuala Lumpur, said reports from Myanmar in recent weeks suggested that human rights violations and abuses committed by the army and insurgents against civilian populations may be getting worse.

Last month, Lee said the army may be committing gross human rights violations under cover of a mobile phone blackout in Rakhine and Chin states.

On Thursday, Lee said the blackout had left many villages unprepared for severe monsoon floods in the area, and has hampered disaster relief and humanitarian responses to the floods.