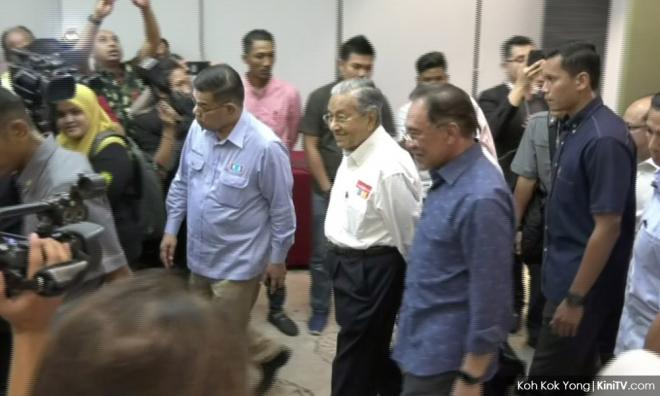 2. For the second day in a row, there was a show of numbers by those aligned to PKR deputy president Mohamed Azmin Ali. Thirteen out of 14 state PKR women's wing chiefs and 12 out of 26 Johor PKR division leaders came out in support of the police's conclusions about a conspiracy against their leader.

3. Three political personalities - A Kadir Jasin, Ezam Mohd Noor and Zaid Ibrahim - said they were not convinced with the police's conclusions about the sex video controversy.

4. Both Azmin and PKR president Anwar Ibrahim are holding prayers on Sunday. Azmin will be praying at the Selangor menteri besar's residence while the prayer session at Anwar's is a regular event.

5. The much-awaited IPCMC bill has been tabled. Read our KiniGuide to learn more.

6. The Kuala Lumpur High Court has ruled that Larry Low, the father of Jho Low, must forfeit RM48 million held in bank accounts after no third party appeared to claim the money.

7. Both the prosecution and defence filed appeals to postpone the case involving Najib Abdul Razak alleged misappropriate of RM2.28 billion in 1MDB funds.

8. Preacher Wan Ji Wan Hussin today lodged a complaint with the Human Rights Commission (Suhakam) and made a police report regarding the alleged assault he experienced while being detained in Kajang Prison.

9. Several DAP activists have urged the MACC to probe the defunct Socio-Economic Development Programme for the Indian Community (Sedic) over alleged abuse of funds.

10. Perak PKR activists held a demonstration outside the Dang Wangi police headquarters last night, claiming that the police have refused to disclose the location of their leader Farhash Wafa Salvador Rizal Mubarak.