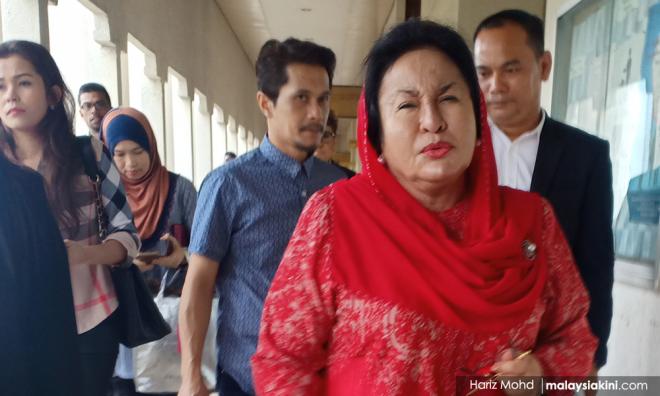 Rosmah Mansor, the wife of former prime minister Najib Abdul Razak, today withdrew her appeal over a notice compelling her to declare her property acquisition between Jan 1, 2009, and Dec 31, 2017 in relation to a money laundering case.

Rosmah's lawyer K Kumaraendran requested for the appeal to be struck out, as the defence had already filed a notice of discontinuance on July 12. Deputy public prosecutor Dusuki Mokhtar did not object.

Kumaraendran told reporters that the appeal was academic, as Rosmah complied with the notice on July 8 this year.

He told the media that the defence would also be withdrawing the application to stay the compliance of the notice at the High Court on Friday.

Rosmah was issued with the notice by the public prosecutor on Nov 1 last year.

She then filed an application to set aside the notice, but it was dismissed by the High Court on May 24.

The notice compelled her to declare all assets acquired under Section 49 (1) (a) of the Anti-Money Laundering, Anti-Terrorism Financing and Proceeds of Unlawful Activities Act 2001.

Failure to comply with the notice is punishable by a maximum RM3 million fine, up to five years’ jail or both upon conviction.

Rosmah, 67, is facing 12 counts of money laundering involving RM7,097,750 and five counts for failing to declare her income to the Inland Revenue Board.