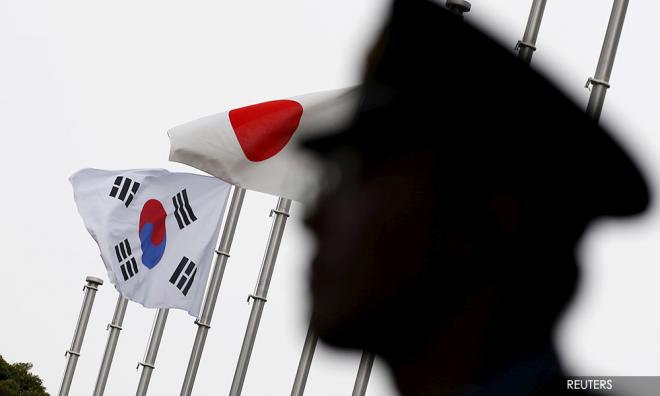 A senior US official said on Wednesday Japan and Korea needed to do some “soul searching” about political decisions that have damaged relations between the two allies in recent months and called for calm words from their leaders.

Marc Knapper, deputy assistant secretary of state responsible for Japan and Korea, told a Washington think tank it was critical to ensure “productive and constructive relationships” between the allies in the face of shared challenges posed by North Korea, Russia and China.

He cited a joint patrol last month by Russian and Chinese aircraft near a group of islets claimed by both South Korea and Japan, calling it “a direct challenge to our three countries; an attempt to take advantage of the current frictions in Japan-South Korea relations.”

“We must not let challenges in the region drive a further wedge between and among our three countries,” Knapper said in an address at the Heritage Foundation in Washington.

“Japan and Korea each suffer consequences when their bilateral ties worsen and we believe that each bears responsibility for improvement for their relations.

“We believe that some soul searching is in order about political decisions that have damaged bilateral trust in recent months and by the same token, we believe that prudence is required to prevent tensions contaminating the economic and security aspects of Japan-South Korea ties.

“Calm confident words from national leaders, we believe, will generate a similar response for their nations.”

The unusually frank comments underlined the depth of concern in Washington about the dispute between the two long-term allies which has brought the relationship between Seoul and Tokyo to arguably its lowest ebb in more than half a century.

Diplomatic tensions intensified after a South Korean court last year ordered Japanese companies to compensate Koreans who were forced to work for Japanese occupiers during World War Two, a matter Tokyo says was settled by a 1965 treaty normalising bilateral ties.

On July 4, in apparent retaliation, Japan restricted exports of high-tech materials to South Korea, sparking a boycott by South Korean consumers of Japanese products and services.

This month, South Korean President Moon Jae-in vowed that South Korea would not be “defeated again” by its neighbour and promised counter-measures after Japan’s cabinet approved the removal of South Korea’s fast-track export status from Aug. 28.

Seoul has also said it will review whether to maintain a military information-sharing pact with Tokyo, which has been important in ensuring a coordinated approach to dealing with the crisis over North Korea’s nuclear weapons.