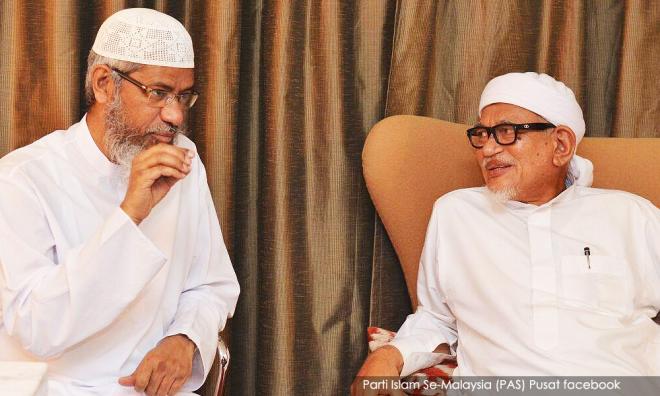 The permanent resident (PR) status, such as that accorded to controversial Islamic preacher Dr Zakir Naik by the Malaysian government, is a human right acknowledged around the world, said PAS.

PAS president Abdul Hadi Awang said in Islam, this also accorded the right to safety to those under threat.

He said this in a statement uploaded on his Facebook today in response to increasing calls for Putrajaya to revoke the Indian-born preacher’s PR, which was given to him by the previous administration.

“The PR status given to Zakir is a human right acknowledged around the world, and by civilised countries. The right to safety is also a guarantee in Islam to whose safety is under threat, even for non-Muslims.

“The (Malaysian) government and related agencies under the Home Affairs Ministry must be firm in according this assurance of safety,” his statement read.

Hadi said this was one of three basic rights which should be respected by all parties in relation to the issue, including authorities, political parties, NGOs, media practitioners and Zakir himself.

Aside from safety, the other two factors cited by the Marang lawmaker are respecting the culture of debates and dialogues in a democracy and preserving the unity in a diverse society.

“All parties should be prepared to confront (each other) and engage in a knowledgeable and civil dialogue, for the sake of discovering truth and commonality.

“[...]All parties are responsible to preserve the sensitivities of different races and faiths in the country,” he said.

Even so, the PAS leader singled out politicians and media practitioners as “pests” who caused inter-racial and inter-religious unease.

“Investigations must be carried out against politicians and media practitioners who have become ‘pests’ who triggered this unease,” Hadi added, without specifying which media or politician he was referring too.

Zakir is currently being investigated by the Malaysian police following controversial statements made during a recent event in Kelantan.

In an Aug 8 talk on the spread of Islam in the Malay archipelago, Zakir claimed that Hindus Malaysians seemed to trust the Indian premier Narendra Modi more than Prime Minister Dr Mahathir Mohamad, while also referring to Chinese Malaysians as "old guests," who should "go back first" before he does.

For the record, Zakir had claimed his statements on both accounts were taken out of context.

Even so, the recent brouhaha has renewed calls for him to be deported back to India, where he is wanted to face several criminal charges related to money laundering and terrorism, or for his PR status to be revoked.

Zakir has denied any wrongdoing in relation to the charges.

A number of states agencies including in Kedah, Malacca, Selangor and Penang, have also begun disallowing Zakir from speaking there.

Mahathir, until recently, has been defending the preacher’s right to stay in the country as a permanent resident, saying the latter’s life was a risk should be he sent home to India.

However, the premier said Zakir had ventured into local politics with the latter’s recent remarks.