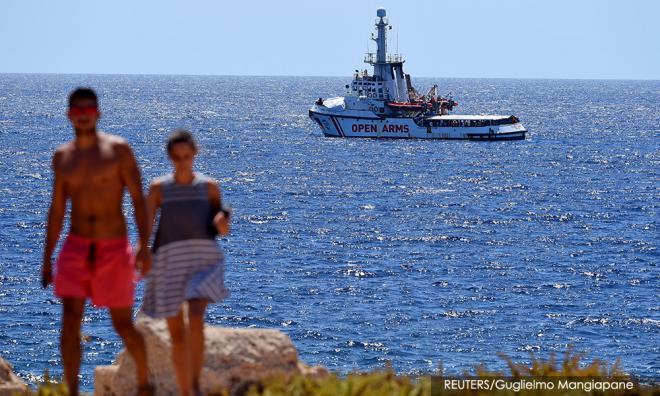 Spain and four other EU states agreed to take in migrants stranded for weeks on the Open Arms rescue ship, EU authorities said on Wednesday, ending a prolonged standoff with the Italian government over their fate.

The around one hundred migrants, picked up from early August onwards in the Mediterranean, had been forced to remain on the crowded Spanish-registered vessel until an Italian prosecutor ordered its seizure and evacuation.

They disembarked on the Italian island of Lampedusa on Tuesday night, and a European Commission spokeswoman in Brussels said Spain, France, Germany, Luxembourg and Portugal had agreed to take them in.

The government in Rome had earlier refused to allow the Open Arms to dock. The charity of the same name that runs the ship said the migrants were distressed and urgently needed to find shelter, and some had jumped overboard in an attempt to swim to shore.

Italian Interior Minister Matteo Salvini has taken a tough line on migrant entry, saying the country has borne too much responsibility for handling African migration to Europe.

The five countries receiving the Open Arms migrants will send teams to register and interview them, make the necessary checks and transport arrangements, meaning the actual relocation to other EU states will take longer than just "a matter of days", Commission spokesperson Tover Ernst said.

"The Commission will...do its utmost to support and help to ensure that procedures are as swift as possible."