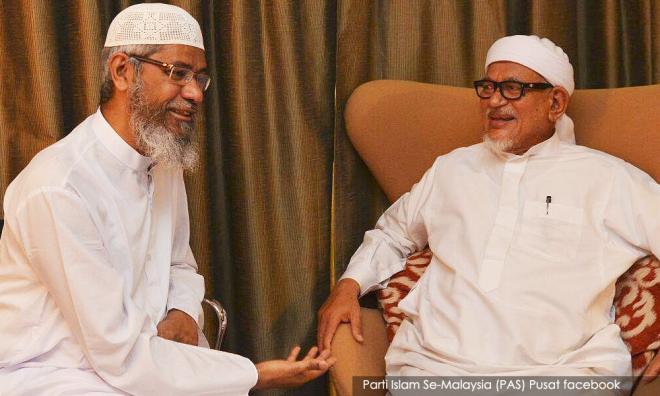 He also called on the police to investigate and take action against those who started the issue and turned it into a political matter.

"The call to deport Zakir was initiated by the Malaysiakini news portal and DAP, whose members failed to understand and address Islam through academic discourse, (and hid) their failure or inability to counter (Zakir) by turning (the matter) into a political one.

“Don't mistreat him (Zakir) when you fail to debate with him. We have told the government about our concern, and now we will also pray to Allah to listen to us.

“If the government deports him, it reflects on our stupidity and weakness. But the matter became a polemic when DAP and Malaysiakini harped on it,” he was quoted as saying by the New Straits Times.

The PAS president was speaking to reporters after delivering a ceramah at the Rusila mosque in Marang, Terengganu, this afternoon.

Last week, Malaysiakini reported that Zakir had courted flak for questioning the loyalty of Hindu Malaysians during an Aug 8 speech in Kelantan.

It was also reported that the preacher had referred to Chinese Malaysians as "old guests" at the same event.

The Indian-born preacher, who is being investigated by the police, claimed that his remarks were taken out of context and has since apologised.

Malaysiakini denies these allegations and has produced explainer pieces on the matter.

Any articles calling for Zakir's deportation are the opinions of the politicians who have made those remarks, and not Malaysiakini's.

Meanwhile, Hadi praised Prime Minister Dr Mahathir Mohamad for remaining firm in his decision not to deport Zakir back to India.

Yesterday, Mahathir said he had not changed his stance on the matter for now.

However, the prime minister previously said Zakir crossed the line when he touched on racial politics.

Mahathir also said the preacher's Malaysian permanent resident status would depend on the outcome of police investigations.

Zakir is wanted by the Indian authorities on charges of alleged money laundering, which the preacher claims are false.