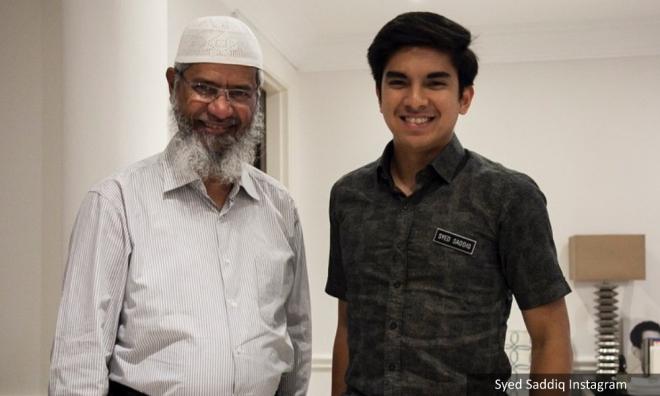 He said yesterday he accepted Zakir's apology, and asked Malaysians to move on from the latest controversy surrounding the Islamic preacher.

As Penang Deputy Chief Minister II P Ramasamy said in a statement today, Syed Saddiq's actions lent credence to the allegation that Pakatan Harapan ministers are "infamous for their U-turns on policy matters."

"Following the incendiary and preposterous speech of the Islamic preacher and fugitive Zakir in Kelantan on the invitation of PAS, Syed Saddiq was one of few ministers who called for the deportation of Zakir to India.

"For Syed Saddiq, it was unthinkable for Zakir to question the loyalty of Hindus and Chinese (Malaysians), whom he considered to be part of his large family in Malaysia.

“However, within a matter of few days and following a dinner with Zakir, Syed Saddiq, the youngest minister in the cabinet, has fundamentally altered his early stand,” he said.

Ramasamy claimed Syed Saddiq’s statement caused many to question how a “responsible minister" could "change his stand as he liked."

The minister revealed on social media yesterday that he had hosted Zakir for dinner at his Petaling Jaya home – just ten days after he backed calls for the preacher to be extradited to India over remarks about Chinese Malaysians.

Zakir, a permanent resident, was reported to have made the remarks during a dialogue hosted by the Kelantan government on Aug 8.

During the same sermon, Zakir also seemingly questioned the loyalty of Hindus here to the Malaysian government.

Aside from calls for Zakir to be sent back to India, where he is wanted for several criminal charges, there have also been calls for his PR to be revoked.

"No one in this world is free from making mistakes. Zakir has apologised... There's no need to insult and disparage. Let's move on, the country needs healing," Syed Saddiq said in his Instagram post.

“Zakir never apologised for his provocative speech in which he insulted and hurt the feelings of the Hindus and Chinese, he merely apologised to those who misinterpreted the contents without comprehending the context.

“So, Syed Saddiq... Do you really believe that Zakir apologised and whether it was genuine?”

'Slap on the wrist'

In a separate statement, Bandar Kuching MP Kelvin Yii said the "slap on the wrist" for Zakir sets a bad precedent, and shows that individuals can make highly sensitive remarks if they are popular enough.

"We all do make mistakes, but the fact of the matter is, this is not the first time such controversial remarks have been made, and then no such apology was issued, and now only after pressure from people and government that he decides to issue an apology questions his sincerity to do so."

Yii (photo) said Putrajaya must instil confidence in the people that the rights of all citizens, regardless of race or religion, will be prioritised.

In a tweet, she said Syed Saddiq's actions were "insulting."

"This does not heal! Your (Syed Saddiq's) first instincts were right. This is a capitulation by you so we don’t need the drivel about apologies etc. It’s insulting.

"You’re one of my favourite ministers and this is disappointing," she tweeted.

Malaysiakini has reached out to Syed Saddiq's team for a response.

Zakir had denied any wrongdoing, and claimed his remarks were taken out of context.