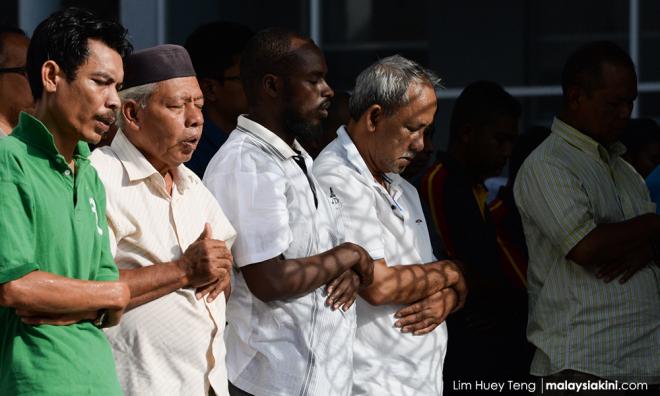 Jakim says no to interfaith prayer, and 8 news from yesterday

1. Muslims in Malaysia are not allowed to participate in interfaith prayers, either in the form of a mass silent prayer or through separate rituals at an event, the Department of Islamic Development Malaysia (Jakim) said in a letter on Aug 7, in response to a query from the Department of National Unity and Integration.

2. The status of controversial Muslim preacher Dr Zakir Naik was raised during a meeting between Prime Minister Dr Mahathir Mohamad and his Indian counterpart Narendra Modi, who asked Mahathir to take steps to extradite the preacher to India, where he is wanted on charges of inciting terrorism and money laundering.

3. Mahathir announced that Russia is keen to set up an aerospace university in Malaysia, saying after a meeting with President Vladimir Putin that he was confident that the proposal by Russia to set up the university would not only boost investment but also promote the transfer of technology in the sector.

4. The government has agreed to transfer the power to appoint the MACC chief commissioner from the prime minister to the Parliamentary Special Select Committee on Public Appointments.

6. A group of Sabah natives came to Putrajaya to hand over memoranda opposing the Papar Dam project to the Prime Minister’s Office and several other ministries.

They also cried foul against the Sabah government for allegedly reneging on its election promise by rebranding the project, instead of cancelling it after winning the 14th general election.

7. The High Court in Kuala Lumpur heard during the 1MDB graft trial that fugitive businessperson Low Taek Jho gave a loan of US$200,000 to then prime minister Najib Abdul Razak's special officer Amhari Efendi Nazaruddin in 2010.

8. Malaysia's Youth and Sports Minister Syed Saddiq Syed Abdul Rahman was among those trapped in the Bung Karno Stadium in Jakarta after crowd trouble following Malaysia's 3-2 defeat of Indonesia in a World Cup qualifier on Thursday night.

9. The Seni Khat Action Team (Sekat) threatened Syed Saddiq with an RM10 million lawsuit for labelling it as "bodoh sombong".