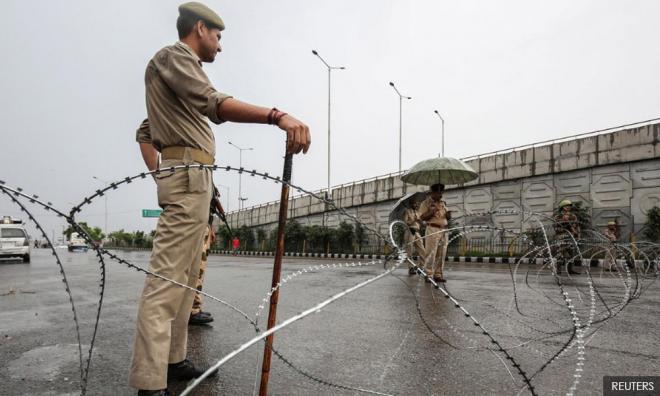 India imposes curfew in Kashmir after clashes during religious procession

India on Sunday imposed curfews in several parts of the contested Kashmir region, after clashes between security forces and Shi’ite Muslims taking part in a procession, officials and eyewitnesses said.

At least 12 locals and six troops were injured on Saturday evening, officials told Reuters, as the worshippers on the traditional mourning procession of Muharram clashed with troops trying to stop it.

Troops used tear gas and pellet guns on the crowd, which insisted on carrying on with the procession, one in a series held at this time of the year, and pelted stones at security forces, an Indian official who declined to named told Reuters.

“The clashes continued till late night, during which the troops fired tear gas and pellets,” he added.

A spokeswoman for India’s interior ministry did not respond to a request for comment.

“Reasonable restrictions are necessary for peace and protection of life,” India’s national security adviser had said on Saturday, accusing Islamabad of trying to stoke violence in the region.

Kashmir, a mountainous Muslim-majority region claimed by both India and Pakistan, has been the site of frequent altercations between security forces and locals protesting against New Delhi’s decision to revoke special rights for the portion of the territory that it controls on Aug. 5.

The five km procession route, that passes through the city centre, has been barricaded by armed troops wearing helmets and bullet proof vests.

“People are advised to stay indoors and not venture out of their home,” the police announced.

Suhail Ahmed, a Rainawari resident, said that there have been frequent clashes in the area for last three to four days as troops have been trying to block the procession.

“We hear deafening sounds of tear gas being fired for last few evenings. We mostly stay indoors, but the gas comes into our homes making it difficult to sleep,” Ahmed said.

Muharram is the first month of the year according to the Muslim lunar calendar, and traditionally processions are held for the first 10 days of the month to observe the death of Prophet Muhammad’s nephew Imam Hussein, killed in battle in 680.

Shi’ite Muslims typically intensify their expression of suffering on the Ashura day, that this year falls on Tuesday.