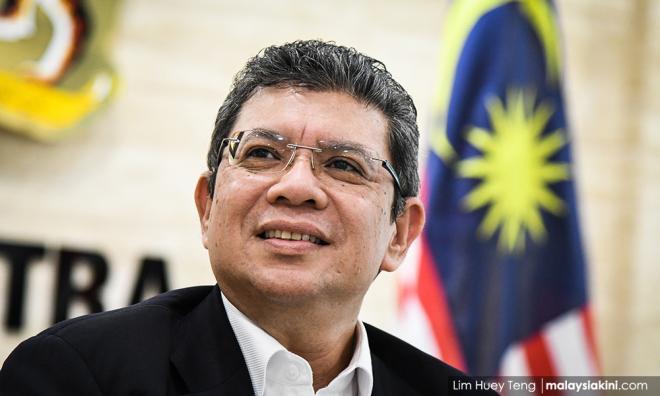 Foreign Minister Saifuddin Abdullah will be making a five-day working visit to China from today until Sept 13 in conjunction with the 45th anniversary of the establishment of Malaysia-China diplomatic relations, the Foreign Ministry said.

It said Saifuddin (photo, above) will have a series of programmes in Shenzhen, Nanning and Beijing during his first official visit to China as foreign minister.

"In Beijing, the Foreign Minister will pay a courtesy call on China's Vice-President Wang Qishan and hold a bilateral meeting with his Chinese counterpart, Wang Yi, who undertook his official visit to Malaysia from July 31 July to Aug 1 last year.

“Saifuddin is also scheduled to meet with former foreign minister and member of the Political Bureau of the Central Committee of the Communist Party of China, Yang Jiechi," it said in a statement here today.

The ministry said Saifuddin will also be visiting the headquarters of Huawei Technologies and Tencent in Shenzhen, the China–Malaysia Qinzhou Industrial Park (CMQIP) in Nanning, and meet with Guangxi provincial leaders.

The CMQIP is the sister park of the Malaysia-China Kuantan Industrial Park (MCKIP).

"The official visit by Saifuddin will demonstrate Malaysia's clear commitment to expanding and deepening further its already strong and comprehensive bilateral collaboration with China.

“Both sides will take stock of the progress of the ongoing efforts and explore new initiatives, especially in the fields of trade, investment, infrastructure connectivity and new advanced technologies, as well as exchanging views on current regional and international issues of common interest,” the ministry said.

China has been Malaysia's top trading partner for 10 consecutive years since 2009. Last year, the total trade between the two countries was recorded at RM313.81 billion (US$77.72 billion), representing 8.1 percent increase from 2017.

malaysia-china ties
45th anniversary
five-day visit
saifuddin abdullah
Related Reports
US-China geopolitical competition no Cold War, says Chin Tong
a year ago
Malaysia upbeat on new round of US-China trade talks
a year ago
Malaysian economic resilience is a must in this age of Sino-US trade war
a year ago
M'sian telcos among those hacked by China to spy on Uighur travellers
a year ago