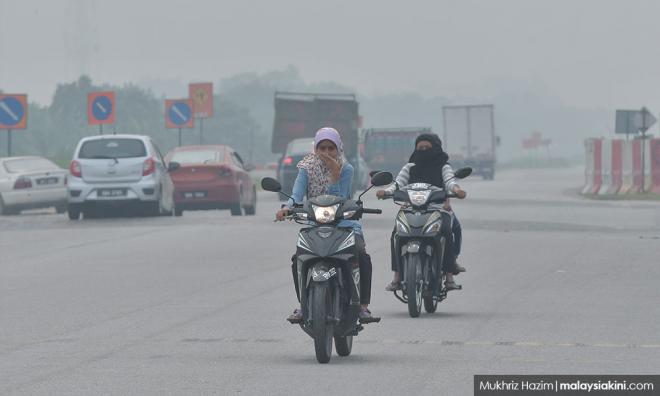 The Air Pollution Index (API) reading has hit a very unhealthy level at Johan Setia in Klang while 20 other areas across the country record unhealthy API readings this morning.

According to the Environment Department API’s readings as at 9am this morning, Johan Setia in Klang, Selangor, recorded a reading of 208.

Johan Setia has been recording very unhealthy readings since yesterday. The API reading dropped ever so slightly to the unhealthy levels of between 101-200 from 7am to noon before climbing back up above the 200 mark.

Meanwhile, Sabah, Sarawak and Labuan in East Malaysia recorded moderate readings as at 9am today.

According to the Asean Specialised Meteorological Centre (ASMC), “persistent hotspots” have been detected in Sumatra and Kalimantan in Indonesia in the past few weeks.

“In the past fortnight between Aug 29 and Sept 12 widespread hotspots were detected in many parts of Kalimantan, as well as central and southern Sumatra.

“Isolated hotspots were also detected in Peninsular Malaysia, Sarawak and Sabah on some days,” it said.

As at 7.36pm last night, the ASMC stated that the dense smoke haze originating from hotspots in central and southern Sumatra “has spread to affect parts of Peninsular Malaysia and Singapore”.

It added that hazy conditions in the region are expected to persist.

In a statement reportedly issued by Comptroller of the Royal Household for Istana Negara Ahmad Fadil Shamsuddin yesterday, the ruler urged Malaysians to reduce outdoor activities, especially those suffering from chronic diseases.

“His Majesty also advised the people to drink a lot of water (at least eight glasses of water per day) besides being concerned about their personal health and to seek immediate treatment if they were unwell,” the statement read.

Yesterday, Malaysia said its Fire and Rescue Department is prepared to help Indonesia put out the forest fires to address the haze problem.

It is believed the problem is linked to forest fires in the region, which have been burning for over a month.

This comes after Indonesia sought to distance itself from the transboundary haze, with its Environment and Forestry Minister Siti Nurbaya claiming instead the problem was caused by smoke being blown into Kuala Lumpur from Sarawak.