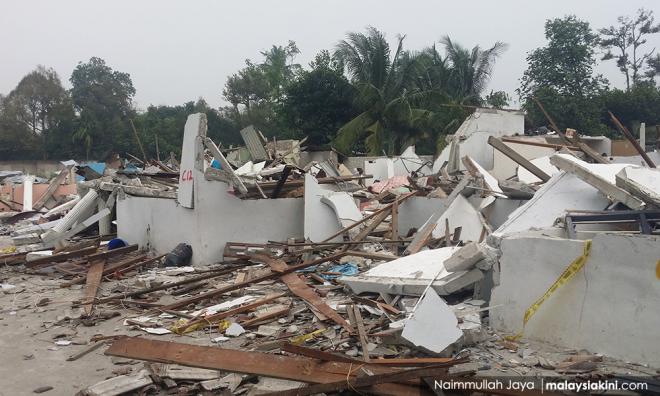 Furore over 30 demolished homes in Paya Jaras, and 8 news from yesterday

1. A furore erupted after more than 30 homes in Kampung Kedondong in Paya Jaras were demolished to make way for a river widening and flood mitigation project at the nearby river.

The houses were built on Selangor government land but residents claim insufficient notice was given for them to move out, despite first being told about it in 2015, according to Menteri Besar Amirudin Shari.

3. Sime Darby Plantation has come out in support of implementing legislation to punish those responsible for fires on their property, even if these are outside Malaysia, following a statement by Prime Minister Dr Mahathir Mohamad that we have to consider new laws to curb the open burning that is believed to be directly responsible for the haze affecting the country right now.

4. Some 2,646 schools nationwide are set to be closed today (Friday) as a result of the haze situation, with some 1,715,274 students being affected by these closures, the Education Ministry announced.

5. A joint enforcement team raided a printing factory in Kapar, Klang, after reports emerged that its workers from Bangladesh, alleging mistreatment by the firm, had fled and sought refuge in the jungles.

6. As Putrajaya plans the next federal budget around its Shared Prosperity vision, academicians have pressed for the government to allocate a bigger portion of public funds on healthcare, education and social protection so that more Malaysians benefit from these programmes.

7. The Home Ministry lifted a ban on a book by former law minister Zaid Ibrahim titled "Assalamualaikum (May Peace Be Upon You): Observations On The Islamisation Of Malaysia".

8. The haze in Kuching has resulted in Malaysia being ranked among the top 10 countries with the world’s worst air pollution index, according to the non-profit World Air Quality Index (Waqi).

Based on Waqi's list of cities with the worst air pollution index, Malaysia currently ranked number four as at 11am yesterday (Thursday) due to the API reading of 272 in Kuching.

9. At former PM Najib's 1MDB trial, the court heard from a witness that he continued to interact with Low Taek Jho even after the latter’s alleged con on Sarawak Governor Abdul Taib Mahmud’s son, Mahmud Abu Bekir Taib, became public in 2009.