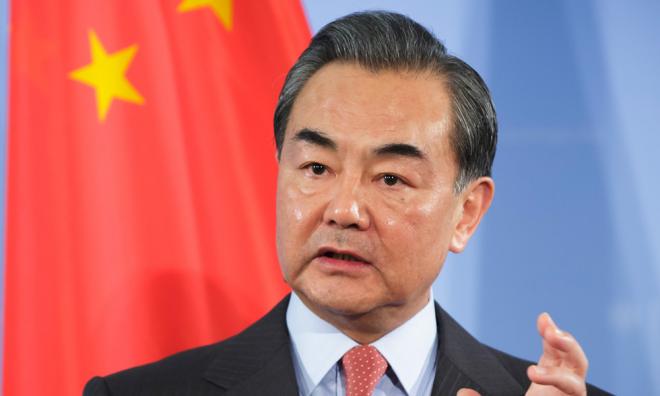 In swipe at Trump, China tells UN tariffs could plunge world into recession

The Chinese government's top diplomat said on Friday that tariffs and trade disputes could plunge the world into recession and Beijing was committed to resolving them in a "calm, rational and cooperative manner".

In a blunt speech to the annual United Nations General Assembly, State Councillor and Foreign Minister Wang Yi (photo) said: "Erecting walls will not resolve global challenges, and blaming others for one's own problems does not work. The lessons of the Great Depression should not be forgotten."

Taking a clear swipe at US President Donald Trump, who started a damaging trade war on China nearly 15 months ago, Wang added, without naming the US leader:

"Tariffs and provocation of trade disputes, which upset global industrial and supply chains, serve to undermine the multilateral trade regime and global economic and trade order.

"They may even plunge the world into recession."

In successive rounds of tit-for-tat tariffs, the United States and China have levied punitive duties on hundreds of billions of dollars of each other's goods, roiling financial markets and threatening global growth.

A new round of high-level talks between the world's two largest economies is expected in Washington in the first half of October.

Wang's remarks, unusually pointed for a Chinese diplomat, coincided with word that the Trump administration is considering radical new financial pressure tactics on Beijing, including the possibility of delisting Chinese companies from US stock exchanges.

Sources told Reuters on Friday that the move would be part of a broader effort to limit US investments into Chinese companies, in part because of growing security concerns about their activities.

News of the potential restrictions on portfolio investments restrictions sent US stocks and oil prices lower on Friday on fears that US-China trade tensions would again escalate. An increase in US tariffs to 30 percent from 25 percent on US$250 billion (RM1 trillion) in Chinese imports is scheduled for Oct 15 if no progress is made before then.

US and Chinese rhetoric on trade this week had seesawed between harsher and more conciliatory, with Trump issuing a sharp rebuke of China's trade practices and state-led development model in his speech before the General Assembly on Tuesday, adding that he would not accept a "bad deal".

On the same day, Wang warned the United States not to interfere with China's sovereignty. But on Thursday he said China was willing to consider increased purchases of farm products and predicted that talks would lead to a resolution if both sides took more steps to improve goodwill.

Trump said on Wednesday a trade deal with China could come sooner than people think, and praised the Chinese purchases.

At the United Nations, Wang also took aim at Trump's policy on North Korea, in which groundbreaking talks between Pyongyang and Washington have stalled, largely over the US refusal to ease punishing sanctions.

Wang said it was necessary for the United Nations to consider invoking the rollback terms of North Korea-related sanctions resolutions "in the light of new developments" on the Korean Peninsula "to bolster the political settlement of the peninsula issue".

He said "the realistic and viable way forward" was to promote "parallel progress in denuclearisation and the establishment of a peace mechanism" to gradually build trust "through phased and synchronised actions".

Wang criticised the US withdrawal this year from a treaty governing intermediate range nuclear missiles, and said China was against the deployment of such missiles in the Asia-Pacific region.

He said China would continue to take an active role in the international arms control process and added that it has initiated domestic legal procedures to join the Arms Trade Treaty.

Trump has said he intends to revoke the US signature to the treaty, which regulates the US$70 billion (RM293 billion) global cross-border trade in conventional arms and seeks to keep weapons out of the hands of human rights abusers.

So far, 104 countries have joined the pact, which the General Assembly approved in 2013.

Wang reiterated comments made earlier in the week, stressing China's commitment to the principle of non-interference in the internal affairs of another country, an apparent reference to Beijing's displeasure at criticism of its handling of protests in Hong Kong.

"On the international stage, we speak for justice and oppose hegemonism or bullying," Wang said.

Shortly before Wang's speech, China and Kiribati formally resumed diplomatic ties at a ceremony he presided over at the Chinese Permanent Mission to the United Nations in New York.

The move followed the Pacific island state's decision to ditch relations with Taiwan, which the US supports with arms supplies and which Beijing considers a renegade province.

"I do believe that there is much to learn and gain from the People's Republic of China, and the re-establishment of our diplomatic relations is just the beginning," Kiribati's President Taneti Maamau said at the event.

The Solomon Islands and Kiribati are the latest countries to switch relations to China, leaving self-ruled Taiwan with formal ties to only 15 countries.

China has no intent to play 'Game of Thrones' but wants sovereignty respected
25 Sep 2019
Trump favours 'whole deal' with China as two sides prepare for trade talks
13 Sep 2019
US, China more divided than ever as new trade talks loom
6 Sep 2019
China lodges tariff case at WTO against the US
3 Sep 2019