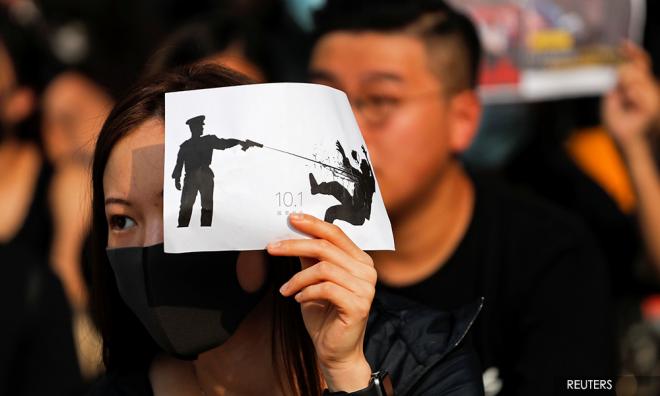 Hong Kong anti-government demonstrators clashed with police into the early hours of today, venting their anger over a policeman's shooting and wounding of a teenager earlier in the week, as months of protests show no sign of letting up.

Activists went on the rampage in districts across the Chinese-ruled city late into the night, hurling petrol bombs, setting fires, blocking roads and vandalising some shops and metro stations as police fired tear gas to disperse them.

"Wherever there are protests nearby I'll come ... I'm out tonight for a simple reason. You don't shoot a teenager at point-blank range," said Alex Chan, an interior designer at a protest in the bustling shopping district of Causeway Bay.

"These protests will continue and we won't give up."

Thousands took to the streets yesterday to denounce the shooting of an 18-year-old secondary school student, which police said was an act of self-defence after the officer's life came under serious threat.

The student was shot at point-blank range as he fought the officer with a metal pipe during violent protests on Tuesday when demonstrators hurled petrol bombs at police who responded with tear gas, rubber bullets and water cannon.

Police said today the protesters' acts "seriously undermined public order and posed a threat to the personal safety of police officers and members of the public."

The former British colony has been rocked by months of protests over a now-withdrawn extradition bill that would have allowed people to be sent to mainland China for trial, but have evolved into calls for democracy, among other demands.

The opposition to the Beijing-backed government has plunged the city into its biggest political crisis in decades and poses the gravest popular challenge to President Xi Jinping since he came to power.

Protesters are also angry about what they see as creeping interference by Beijing in their city's affairs despite a promise of autonomy in the "one country, two systems" formula under which Hong Kong returned to China in 1997.

China dismisses accusations it is meddling and has accused foreign governments, including the United States and Britain, of stirring up the anti-China sentiment.