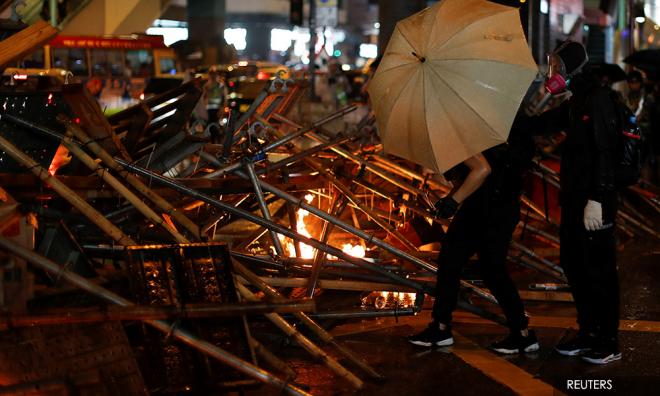 Hong Kong struggled to recover on Monday, with the metro only partially functioning and infrastructure extensively damaged, after scores of protesters were arrested in violent clashes overnight that drew the first warning from the Chinese military.

Tens of thousands of protesters marched peacefully through the centre of the Chinese-ruled city on Sunday, wearing face masks in defiance of colonial-era emergency powers that threaten them with a maximum of one year in prison for hiding their faces.

However, the rallies deteriorated into running clashes as night fell. Police fired tear gas and used baton charges in an attempt to disperse petrol bomb-throwing protesters in several locations across the Asian financial hub.

Scores of protesters were arrested and bussed away under the new emergency laws, which came into effect on Friday night, after some of the most violent clashes in four months of protests virtually shut the city down on Saturday.

The protests have plunged the former British colony into its worst political crisis in decades and pose the biggest popular challenge to Chinese President Xi Jinping since he came to power in 2012.

The Hong Kong government said in a statement early on Monday, a public holiday in the city, "public safety has been jeopardised and the public order of the whole city is being pushed to the verge of a very dangerous situation".

Further protests are planned in different districts on Monday evening.

Hong Kong's rail operator, MTR Corp, said on Monday that, due to "serious vandalism", most of the stations in the network were temporarily closed.

MTR's announcement followed an unprecedented closure on Saturday and minimal operations on Sunday, which largely paralysed much of the city.

The entire network, which carries around 5 million passengers a day, would shut at 6 p.m. (1000 GMT), more than four hours earlier than normal, to allow for repairs, it said.

Grocery stores, that had shut early on Sunday, were mostly open by Monday morning. Many businesses and stores have had to close repeatedly during the four months of protests and Hong Kong now faces its first recession in a decade.

Hong Kong's embattled leader Carrie Lam invoked emergency powers last used more than 50 years ago in the hope of quelling the protests, but the move has had the opposite effect, sparking three nights of violence.

China's Hong Kong military garrison warned protesters on Sunday they could be arrested for targeting its barracks with laser lights.

A few hundred protesters shone laser lights on the barracks walls, the first time they have targeted PLA facilities, and troops in fatigues on the roof shone spotlights at protesters in return. The protesters eventually dispersed.

What started as opposition to a now-withdrawn extradition bill has grown into a pro-democracy movement against what is seen as Beijing's increasing grip on the city, undermining its "one country, two systems" status promised when Britain handed Hong Kong back to China in 1997.