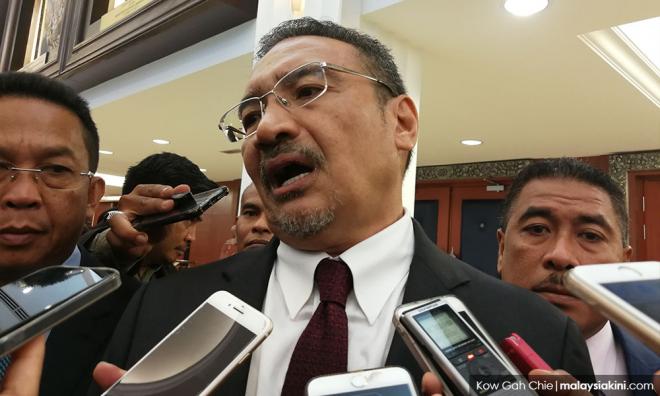 The prime minister's media advisor, A Kadir Jasin does not appear to believe that Umno's Hishammuddin Hussein was out to throw a spanner at Pakatan Harapan's succession plan.

Instead, Kadir believed that speculations of Hishammuddin's clandestine dealings with Dr Mahathir Mohamad probably had more to do with Umno's current problems.

Moreover, there are those within Umno who are uncomfortable with the party's coupling with PAS.

This had allowed Hishammuddin to emerge as the party's de facto leader, said Kadir.

"It appears that his words are being taken more seriously by Umno members and the public than those of (former Umno president) Najib (Abdul Razak) and (current Umno president) Ahmad Zahid (Hamidi)," wrote Kadir (photo) in his blog today.

Both Najib and Zahid had their image battered due to corruption trials, but as the wheels of justice turned slowly, the public's attitude towards them had softened, argued Kadir.

This has emboldened "some" Umno leaders, said Kadir, who wish to take Umno away from tainted people.

He opined that after during Zahid's six-month leave of absence, his deputy Mohamad Hasan and Rembau MP Khairy Jamaluddin was seen as a "ray of hope".

"But when Zahid came back to run the party, Mohamad appeared to have lost his shine and the hope for change diminished.

"Thus, the rise of Hishammuddin and, to a lesser degree, Khairy is a very exciting development.

"Personally, I believe these two moderate Malays could be the answer to Umno’s leadership conundrum," wrote Kadir.

Kadir believed that Hishammuddin and Khairy were "out of place" in the Umno-PAS configuration.

However, the theory that Hishammuddin was conspiring with Bersatu's Hamzah Zainuddin to move Umno away from PAS and towards Mahathir likely arose from the recently concluded Malay Dignity Congress.

Hamzah has been established as the primary conductor of event, which was also attended by Hishammuddin and Khairy, not Zahid nor Najib.

"I think people like Hishammuddin and Khairy are more important to the survival of Umno than to the Harapan succession plan. Left to the current leadership, Umno will be fighting an uphill battle to stay alive.

"Whereas the Harapan succession plan is a done deal in as far as the transfer of power from Mahathir to (PKR president) Anwar (Ibrahim).

"But still we have to accept that fate is not always in our hands and the democratic process is never straight forward," he said.

After staying away from the limelight since the fall of BN during the last Parliamentary elections last year, Hishammuddin had recently become a hot topic again after he was accused of engineering the formation of a new government sans DAP and Amanah.

The allegation was made in a joint statement by the secretaries-general of Bersatu, PKR and Amanah. It was also signed by the DAP organising secretary.

Although Hishammuddin has denied the allegation, multiple sources from both sides of the divide had told Malaysiakini had fingered him in the plot.

According to the Harapan joint statement, and a statement from PKR's central leadership council (MPP) on Friday, those who were in on the plot were attempting to shield themselves from prosecution.