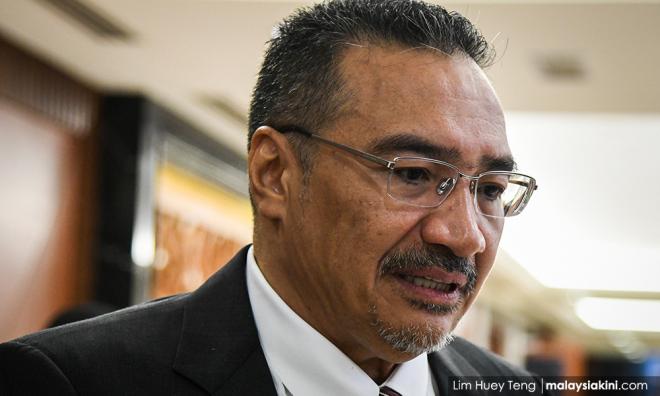 Pakatan Harapan today claimed that Umno's Sembrong MP Hishammuddin Hussein is pushing for the formation of a government that will exclude both DAP and Amanah.

In a joint statement, the ruling coalition said Hishammuddin should cease such efforts.

"The Pakatan Harapan secretariat urges Umno politician Hishammuddin and his colleagues to cease their campaign to promote the idea of a government without the participation of DAP and Amanah.

"Hishammuddin, in his writing and interviews, has signalled a tendency that returns to race-based politics and governance.

"This is outdated politics that completely goes against Harapan's politics of inclusiveness," read the statement today.

Earlier today, PKR president Anwar Ibrahim had in the Dewan Rakyat made veiled references about such an effort when debating the Budget 2020 speech.

"This is the problem of wanting to follow the strategy by Sembrong and others. All this is nonsense.

"All this is sometimes for personal survival [...] to close MACC cases. We don't want that. Politics should not be about threats, it should be about principles.

"Be it threats of prosecution or imprisonment, one's principle must not be sacrificed," Anwar had said in an apparent appeal for other BN MPs not to side with Hishammuddin.

Hishammuddin is not part of the current government and has no authority over enforcement agencies in the country but Anwar did not disclose where the threat of prosecution was coming from.

The Harapan secretaries-general said the coalition and Warisan in Sabah stood firm with the current composition of their ruling coalition.

They added that during this Budget 2020 season, people should be reminded of Prime Minister Dr Mahathir Mohamad's speech from 1991.

They then quoted Mahathir's words as follow: "To create a united Malaysia with shared objectives, Malaysia must be a peaceful country that is regionally and racially integrated, living in harmony and fully cooperating in a just manner, comprising a Bangsa Malaysia that is politically loyal and dedicated to the nation".

The Harapan secretaries-general also said they stood by their Jan 7, 2018 consensus that outlined the core aspects that brought the Harapan components together to reject BN which they said propagated racism and brought about kleptocracy in the country.

"This was the basis of the mandate that the people delivered in the 14th general election; this duty should not be pawned for political interest," they said.

The five leaders did not elaborate on the Jan 7, 2018 consensus agreement but it is believed to be the same document that outlines Mahathir's eventual transition of power to Anwar.

"Any 'mischievous' attempts to return to such politics (racism and kleptocracy) following the change on May 9 last year is a backward move that will not even be recorded in the footnotes of history.

"Instead, it will allow kleptocrats and their accomplices to return to the throne," they said in their statement today.