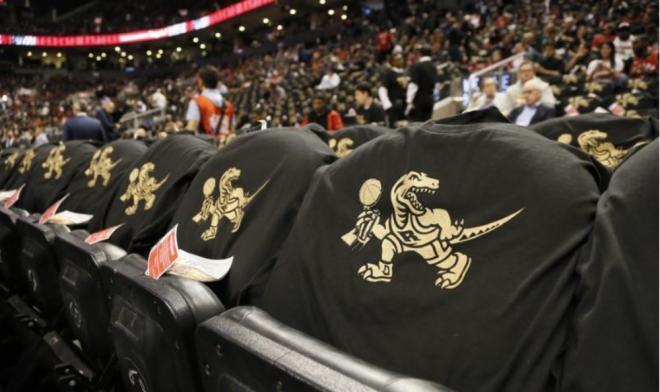 Hong Kong pro-democracy supporters crashed the NBA’s opening night party on Tuesday handing out thousands of black t-shirts as the Toronto Raptors prepared to begin the defence of their championship title against the New Orleans Pelicans.

While the Raptors gifted the opening night crowd with t-shirts with a gold Raptor and replica championship rings, outside Scotiabank Arena the protesters were giving away black t-shirts with the message “The North Stand With Hong Kong” in bright yellow across the front.

The North reference was a play on the Toronto Raptors slogan “We the North” that is used to market the team.

One volunteer, wearing a black surgical mask and who did not want to be named, said the Toronto group raised close to US$34,000 through a GoFundMe page to print 7,000 t-shirts.

The NBA was plunged into controversy earlier this month after Houston Rockets General Manager Daryl Morey tweeted his support for Hong Kong’s pro-democracy demonstrators in a since-deleted post that included an image captioned: “Fight For Freedom. Stand With Hong Kong.”

In the aftermath of Morey’s tweet, China did not broadcast or stream two preseason games that were held in the country between the Los Angeles Lakers and Brooklyn Nets while the NBA canceled many player appearances.

Some Chinese corporate partners of the NBA have also scrapped or suspended relations with the league.