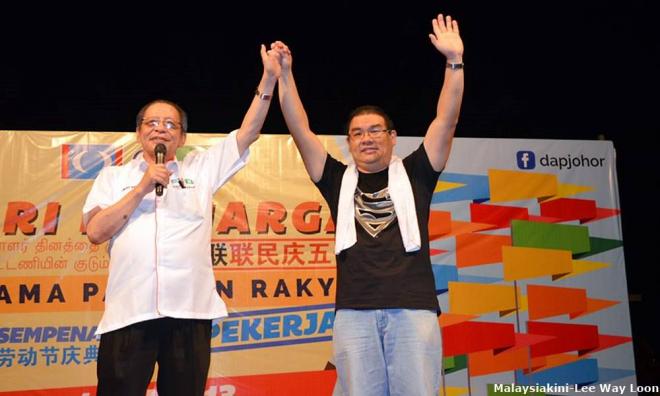 Hew irreverent, crude and vulgar but not a communist – Kit Siang

Lim Kit Siang had several unflattering descriptions for Hew Kuan Yau, whom he has known for three decades, but is convinced that his former political secretary is not a communist or would promote communism.

Therefore, the DAP veteran was shocked that the Home Ministry banned Hew's comic book under Section 7(1) of the Printing Presses and Publications Act (PPPA) 1984 for among other reasons promoting communism and sympathy for the communist struggle.

“I have known Hew for over three decades, since the early years as an 'angry young man' who was unorthodox and irreverent, to the extent of being extremely crude and vulgar causing great embarrassment all round, to fight for justice and a better Malaysia, and the last thing he would do is to be a communist or to promote communism.

“I do not agree with all of Hew's thoughts and ideas and I have not read his comic book when the controversy blew up but Hew is neither a communist nor a communist sympathiser,” he said in a statement this evening.

However, Lim disagreed with the Home Ministry's decision in levelling the communism-related charges against the book titled Belt and Road Initiative for Win-Winism.

Urging the ministry to review the ban, the Iskandar Puteri MP reminded that the Pakatan Harapan government had come into power on the promise to usher in an era of greater openness without undermining national security.

“In fact, in Promise No 27, Harapan had specifically made the pledge in the 14th general election to repeal oppressive laws like the PPPA 1984,” he added.

Earlier, Hew, a former firebrand DAP member, known amongst his supporters as “Superman”, announced his resignation as the chief executive officer for the Malaysia China Business Council (MCBC).

Hew had defended the trilingual book, which was distributed to secondary schools nationwide, saying it was meant to promote better understanding between Malaysia and China, as well as the BRI.

“When we gazetted (the ban), that means that appropriate action and seizures will be taken if it is still in circulation as the decision (to ban the book) was made after we have considered and studied it.

“There was definitely solid basis (for the ban) and not because of any sentiments or actions by any party (but) based on the content that has been distributed throughout the country and in schools,” he told reporters this morning.

Home Ministry officers also seized copies of the book from the Asia Comic Cultural Museum in Penang. Hew is the curator of the museum.

He referred to photographs showing Xi flipping through the book.

Hew irreverent, crude and vulgar but not a communist – Kit Siang