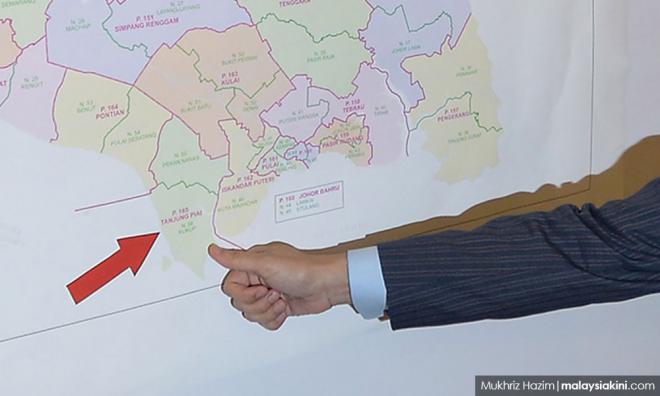 TG PIAI POLLS | The Tanjung Piai Parliamentary by-election is regarded as a deciding battleground for Pakatan Harapan and BN to prove which party can woo fence-sitters.

Darul Ehsan Institute (IDE) deputy chairperson Prof Mohammad Redzuan Othman said this was because 17 percent of voters had yet to set their mind on the candidates they would be choosing.

He said the opinion was summarised from an IDE Field Survey conducted on 1,518 respondents starting from Oct 18 to Oct 20.

Commenting further, he said, through the study too, 83 percent of voters had decided to pick the same parties as in the 14th general election (GE14).

‘’As such, the 17 percent of voters who have yet to decide is the group to be approached by both the contesting parties to determine victory at the by-election,’’ he told a media conference at the Tanjung Piai P165 By-election: An Analysis, in Shah Alam today.

Mohd Redzuan said the perception that the UMNO-PAS cooperation could pave the way for them to win the by-election was inaccurate.

He said the study showed that the voter support for both the contesting parties was rather balanced, thus the by-election was seen as more open.

‘’The study also found that 33 percent of the voters said from one to two of their family members, who are also voters, do not live in the parliamentary area.

‘’As such, any party which can find a way to bring the outstation voters to a polling box on Nov 16 will win,’’ he said.

In the meantime, commenting on the candidates from both parties contesting at the by-election, Mohammad Redzuan regarded Bersatu's decision to field a Malay voter would surely be more accepted compared to BN which is fielding a candidate from MCA.

‘’This is because Malay voters make up 57 percent of the 57,986 voters. Even so, I see the Bersatu machinery is more prepared than when compared to during the Semenyih State Assembly seat by-election in March,’’ he said.

As such, the Harapan machinery should look at the aspect of racial percentage more closely to make use of the chance to attract the Malay voters to pick them later.

Commenting on the action of Parti Gerakan Rakyat Malaysia and Parti Bumiputra Perkasa Malaysia (Putra) which also fielded candidates in the by-election, Mohammad Redzuan was of the opinion they would not have any impact on the voters’ support to Harapan and BN.

The Tanjung Piai Parliamentary by-election would be held on Nov 16 while the early polling was slotted for Nov 12 following the death of its incumbent, Dr Md Farid Md Rafik, 42, who was also deputy minister in the Prime Minister’s Department, on Sept 21 from heart complications.