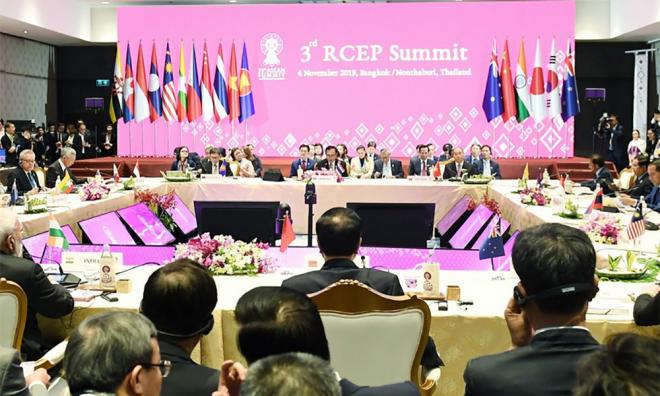 Although India pulled out at the last minute, China and 14 other countries agreed in Bangkok this week on plans for what could become the world's biggest trade agreement - the Regional Comprehensive Economic Partnership (RCEP).

They aim to sign it next year to start freeing up trade between members that include the 10-member Association of Southeast Asian Nations (Asean), Japan, South Korea, Australia and New Zealand.

What will RCEP do?

Exact details have yet to be released, but it will progressively lower tariffs across many areas.

Its backers say that just as importantly it will let companies export the same product anywhere within the bloc without having to meet separate requirements and fill out separate paperwork for each country.

"For a goods producer, it's huge. What we don't have now is a lot of Asian trade for final markets in Asia. This sets that up," said Deborah Elms of the Asian Trade Centre. "

It gives an incentive for companies to build supply chains within the region even if they export outside.

The agreement also touches on services and on protecting intellectual property.

What doesn't it do?

RCEP is not seen as such a "high quality" trade agreement as the Comprehensive and Progressive Agreement for Trans-Pacific Partnership among 11 Asia-Pacific countries, because it does not cover or harmonise as much.

Tariffs are agreed between countries rather than across the board.

For some countries, sensitive issues such as agriculture won't be touched. It lacks provisions for liberalising state enterprises or protecting workers and the environment.

What economic impact will it have?

Even once signed, implementation would take months to start and years to complete. The complexity makes precise calculations hard, economists say.

What does India's absence mean?

India can join later and other countries - notably Indonesia and Japan - have been lobbying it hard to stay. But Prime Minister Narendra Modi was emphatic about rejecting terms the other members agreed.

"While India's exit devalues the pact, it also removes the single biggest obstacle to its completion," said Anthony Nelson of consultancy Albright Stonebridge.

India's biggest concern is a wave of cheap goods from China and elsewhere.

For other countries, losing India means they won't access a market that is notoriously hard to get into, but also they won't be able to include India as easily in supply chains.

Supporters of the deal argue that India will lose investment while its consumers will pay more than they should.

"It's a missed opportunity for India," said Pavida Pananond of Thammasat University in Bangkok.

What does it mean for global trade?

Just getting the deal done - even without India - is a boost for multilateral trade deals over the bilateral sort favoured by US President Donald Trump.

Trump's tariff-raising trade war with China gave extra impetus to push ahead with RCEP, which had progressed only sluggishly since 2012.

Does this strengthen China versus the US?

China is already the biggest source of imports and destination of exports for nearly all the RCEP countries.

But at a time of growing concerns over China's might, it cements its position more firmly as an economic partner with East and Southeast Asia. It will also be better placed to shape the region's trade rules.

Additional symbolism for China's rise at the expense of the US came from the deal being agreed alongside an Asean summit to which Trump's administration sent a lower-ranking delegation than all other countries.

In a snub to the Americans, they were met by only three of the region's leaders instead of the full group of 10.

"China measures up commendably against the US diplomatic faux pas and India's RCEP withdrawal," said Siew Mun Tang of the Yusof Ishak Institute in Singapore.