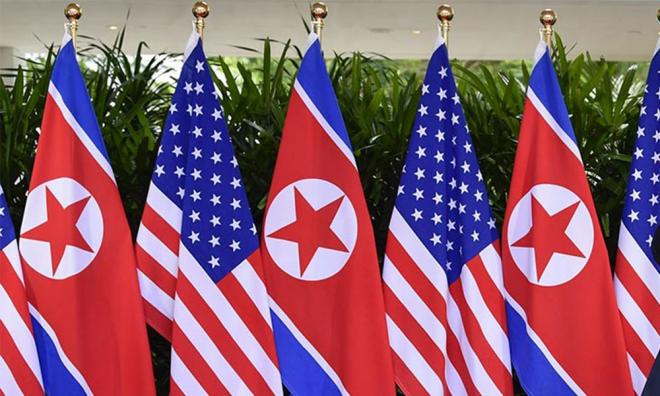 North Korea said today it has been offered a fresh meeting with the United States but is uninterested in more talks aimed at “appeasing us” ahead of a year-end deadline Pyongyang has set for Washington to show more flexibility in their negotiations.

Kim Myong Gil, the North’s nuclear negotiator, said in a report carried by state media that Stephen Biegun, his US counterpart who jointly led last month’s failed denuclearisation talks in Stockholm, had offered through a third country to meet again.

Kim and Biegun met last month in the Swedish capital for the first time since US President Donald Trump and North Korean leader Kim Jong Un agreed in June to re-open negotiations that have been stalled since a failed summit in Vietnam in February.

But the meeting fell apart, with Kim saying the US side failed to present a new approach.

“If the negotiated solution of issues is possible, we are ready to meet with the US at any place and any time,” Kim said in a statement carried by the official KCNA news agency.

But he called Biegun’s proposal a “sinister aim of appeasing us in a bid to pass with ease” Pyongyang’s year-end deadline. “We have no willingness to have such negotiations.”

North Korea has been seeking a lifting of punishing sanctions, but the United States has insisted Kim Jong-un must dismantle his nuclear weapons programme first.

The North Korean statement came after General Mark Milley, the US Joint Chiefs of Staff chairperson, reaffirmed that the United States was ready to use the “full range” of its capabilities to defend South Korea from any attack.

Senior US defence officials are gathering in Seoul for annual meetings as the two countries face intensifying threats from North Korea to stop joint military drills.

The United States is also seeking a greater financial contribution from South Korea for hosting American troops while urging Seoul to revoke its decision to scrap an intelligence-sharing pact with Japan known as GSOMIA, which Washington fears would undermine trilateral cooperation.

Both sides discussed ways to maintain solid defence posture and a planned transfer of wartime operational control to South Korea, a joint statement said, even as they have scaled back joint exercises to expedite negotiations with North Korea.

“He affirmed that the United States remains prepared to respond to any attack on the Korean Peninsula, using the full range of US military capabilities.”

US Defence Secretary Mark Esper was arriving in Seoul later on Thursday, ahead of a meeting with South Korean Defence Minister Jeong Kyeong-doo for the annual Security Consultative Meeting tomorrow.

Esper said yesterday he was open to changes in US military activity in South Korea if it helped diplomats trying to jump-start stalled talks with North Korea.

Pyongyang has derided the US-South Korea exercises as hostile, even in the current reduced form. Yesterday, it threatened to retaliate if the allies go ahead with scheduled drills in a rare statement from the State Affairs Commission, a top governing body chaired by leader Kim Jong-un.

Milley has hinted at raising the troop cost-sharing and Japan issues, though the joint statement did not address them directly.

Trump’s (above, left) insistence that Seoul takes on a greater share of the cost of the 28,500-strong US military presence as deterrence against North Korea has rattled South Korea. It could also set a precedent for upcoming US negotiations on defence cost-sharing with other allies.

A South Korean lawmaker said last week that US officials demanded up to US$5 billion a year, more than five times what Seoul agreed to pay this year under a one-year deal.

Washington has also been pressing Seoul to reconsider its decision to scrap the GSOMIA intelligence-sharing pact with Japan. The pact, which South Korea decided not to renew, expires on Nov 23.

Esper said yesterday that GSOMIA “must be maintained” for cooperation between the United States, South Korea and Japan against any “North Korean bad behaviour”.